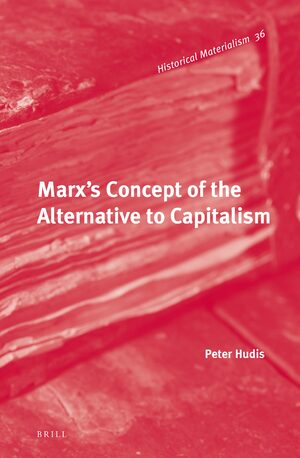 Marx's Concept of the Alternative to Capitalism

Author: Peter Hudis
In contrast to the traditional view that Marx's work is restricted to a critique of capitalism and does not contain a detailed or coherent conception of its alternative, this book shows, through an analysis of his published and unpublished writings, that Marx was committed to a specific concept of a post-capitalist society that informed his critique of value production, alienated labor and capitalist accumulation. Instead of focusing on the present with only a passing reference to the future, Marx's emphasis on capitalism's tendency towards dissolution is rooted in a specific conception of what should replace it. In critically re-examining that conception, this book addresses the quest for an alternative to capitalism that has taken on increased importance today.
E-Book (PDF)

€116.00$146.00
​
Add to Cart
Peter Hudis, Ph.D. (2011) in Philosophy, Loyola University Chicago, is Professor of Humanities and Philosophy, Oakton Community College. He has published extensively on Marxist theory and is General Editor of The Complete Works of Rosa Luxemburg.
"A particular strength of Hudis's book is that it examines the full sweep of Marx's writings, rather than focus on one particular text or period of Marx's life. No stone is left unturned in attempting to uncover the implicit conception of an alternative [vision to capitalism]. The scope of this allows him to include a number of texts which are often overlooked in this discussion, and offer a number of novel interpretations of works usually discussed in different contexts." – Dan Swain, in: Marx & Philosophy: Review of Books, 1 December 2012
Acknowledgements

Introduction: Why Explore Marx’s Concept of the Transcendence of Value Production? Why Now?
The object and purpose of this study
Objectivist and subjectivist approaches to Marx’s philosophical contribution

4. Marx’s Late Writings on Postcapitalist Society
The impact of the Paris Commune on Marx
The Critique of the Gotha Programme and ‘Notes on Wagner’

Appendix: Translation of Marx's Excerpt-Notes on the Chapter 'Absolute Knowledge' in Hegel's Phenomenology of Spirit

All those interested in Marx, Marxist philosophy, dialectics, theories of liberation and efforts at forging an alternative to the capitalist world system.