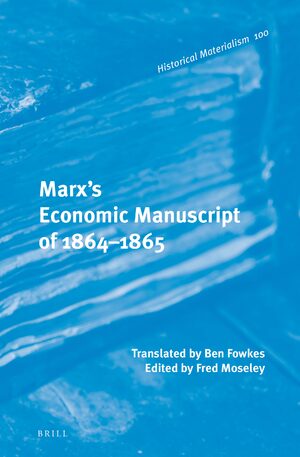 Editor: Fred Moseley
Translator: Ben Fowkes
Marx’s only full draft of Volume III of Capital was written in the Economic Manuscript of 1864—1865. The Volume III that we know was heavily edited by Engels. It has been a long-standing question in Marxian scholarship whether or not there are significant differences between Marx’s original manuscript and Engels’s edited version. Marx’s manuscript was published for the first time in German in 1992 in the Marx/Engels Gesamtausgabe, Section II, Volume 4.2, but this important manuscript has not previously been translated into English. The publication of this English translation of Marx’s original manuscript is thus an important event in Marxian scholarship. English-speaking Marxist scholars can finally compare Engels’s Volume III with Marx’s original manuscript and evaluate for themselves the significance of the differences.
E-Book (PDF)

€305.00$406.00
​
Add to Cart
Fred Moseley is Professor of Economics at Mount Holyoke College and is the author and editor of numerous books and articles on Marx’s theory, especially the logical method employed by Marx in Capital and the theory of the distribution of surplus-value in Volume III of Capital.
Translator’s Note
Introduction by Fred Moseley

Chapter One: The Transformation of Surplus-Value into Profit
1. Surplus-Value and Profit
[2. Cost Price]
3. Economy in the Use of Constant Capital
4. The Effect of Changes in Raw Material Prices
5. Release and Tying-up of Capital, Depreciation and Appreciation, Revaluation and Devaluation of Capital
6. The Influence of Changes in Circulation Time, its Shortening or Lengthening (and also changes in the means of communication connected with this) on the Rate of Profit
7. Profit (as it appears to the bourgeois)

Chapter Three: The Law of the Tendential Fall in the General Rate of Profit with the Advance of Capitalist Production

Chapter Seven: The Revenues and their Sources
1. The Trinity Formula
2. [On the Analysis of the Production Process]
3. The Illusion Created by Competition
4. Relations of Production and Distribution
5. Classes

Appendix
Bibliography
Index
Marxian scholars around the world, and indeed anyone concerned with the heritage of Marx's thinking, will find this newly translated volume an indispensable tool.