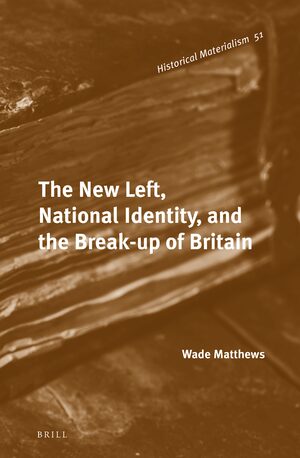 The New Left, National Identity, and the Break-up of Britain

Series:  Historical Materialism Book Series, Volume: 51
Author: Wade Matthews
In The New Left, National Identity, and the Break-Up of Britain Wade Matthews charts the nexus between socialism and national identity in the work of key New Left intellectuals, E.P. Thompson, Raymond Williams, Stuart Hall, Perry Anderson, and Tom Nairn. Matthews considers these New Left thinkers’ response to Britain’s various national questions, including decolonization and the End of Empire, the rise of European integration and separatist nationalisms in Scotland and Wales, and to the national and nationalist implications of Thatcherism, Cold War and the fall of communism. Matthews establishes a contestatory dialogue around these issues throughout the book based around different New Left perspectives on what has been called “the break-up of Britain.” He demonstrates that national questions where crucial to New Left debates.
E-Book (PDF)

€125.00$151.00
​
Add to Cart
Wade Matthews completed his PhD in history at the University of Strathclyde in 2007. Recently, he was a Postdoctoral Fellow at Trent University and York University. His work has appeared in Labour/Le Travail, International Review of Social History, and Socialist Studies.
Acknowledgements
Preface

1. History and Historiography of the New Left in Britain

2. Socialist Intellectuals and the National Question before 1956

3. E.P. Thompson in the Provinces

6. Perry Anderson against the National Culture

References
Index
The New Left, National Identity, and the Break-up of Britain will appeal to those scholars and students interested in the history of socialism and national identity in Britain in the twentieth-century.