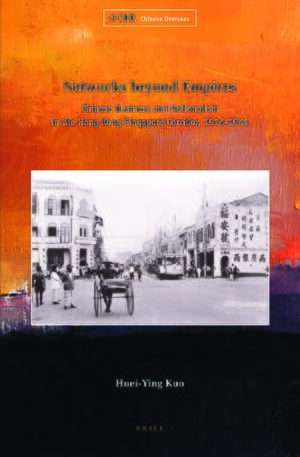 Chinese Business and Nationalism in the Hong Kong-Singapore Corridor, 1914-1941

Organization of transnational businesses and nationalist campaigns overlapped with the boundary of Chinese speech-group networks. Embedded in different political-economic contexts, these networks fostered different responses to the decline of the British power, the expansion of the Japanese empire, as well as the contested state building processes in China. Through negotiating with the imperialist powers and Chinese state-builders, Chinese bourgeoisie overseas contributed to the making of an autonomous space of diasporic nationalism in the Hong Kong-Singapore corridor.

€152.00$188.00
​
Add to Cart
Huei-Ying Kuo, Ph. D. (2007) SUNY-Binghamton, is a senior lecturer at the Department of Sociology, Johns Hopkins University. She has published many articles on Chinese overseas, including Enterprise and Society, Singapore in Global History and Chinese History in Geographical Perspectives.
“Without a doubt, Networks beyond Empires is an extremely readable and must-read work on Chinese bourgeoisie overseas’ nationalist activities in both Hong Kong and Singapore from 1914 to 1941. This book deserves a wide readership among those interested not only in Chinese overseas, but more broadly in Chinese bourgeoisie, nationalism, and international politics as well.”
Kai Chen, Xiamen University, New Zealand Journal of Asian Studies, Vol. 18, No. 1 June 2016

“Whether in Huei-Ying Kuo’s work on Chinese nationalism in the Hong Kong-Singapore corridor (Kuo 2014); Leander Seah’s work on Chinese transregionalism within the Nanyang region (Seah 2011), or Richard Chu and Ruth de Llobet’s work on Chinese mestizos in the Philippines (Chu 2010; de Llobet 2014), one encounters increasingly grounded, translocal, and theoretically sophisticated work whose examinations of the historical and anthropological dynamics of identity formations within Chinese communities outside of the confines of Chinese nation-state prompt us to ask new questions about Chinese nation-formation and national identity within the boundaries of the Chinese polity.”
Thomas Mullaney, Stanford University, in A Companion to Chinese History, ed. Michael Szonyi, 2017: 301.

1. The Making of Chinese Overseas in the South Seas in Longue Durèe

All interested in the history of modern China, British Hong Kong and Singapore, Chinese overseas, interwar Japan's southward advance, and anyone concerned with nationalism, transnationalism and world-system study.