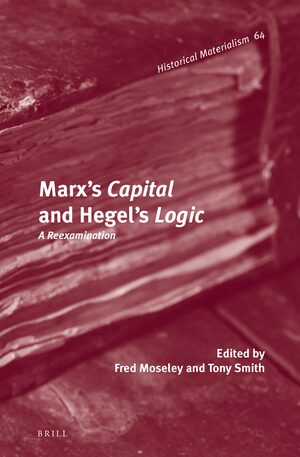 Series:  Historical Materialism Book Series, Volume: 64
Editors: Fred Moseley and Tony Smith
This book provides a wide-ranging and in-depth reappraisal of the relation between Marx’s economic theory in Capital and Hegel’s Logic by leading Marxian economists and philosophers from around the world. The subjects dealt with include: systematic dialectics, the New Dialectics, materialism vs. idealism, Marx’s ‘inversion’ of Hegel, Hegel’s Concept logic (universality-particularity-singularity), Hegel’s Essence logic (essence-appearance), Marx’s levels of abstraction of capital in general and competition, and capital as Hegelian Subject.

The papers in this volume were originally presented at the 22nd annual meeting of the International Symposium on Marxian Theory at Mount Holyoke College in August 2011. The twelve authors are divided between seven economists and five philosophers, as is fitting for the interdisciplinary subject of the relation between Marx’s economic theory and Hegel’s logic.

€134.00$165.00
​
Add to Cart
Fred Moseley is Professor of Economics at Mount Holyoke College (Massachusetts, USA). He is the author of The Falling Rate of Profit in the Postwar United States Economy (1992) and editor of Marx’s Logical Method: A Reappraisal (1993), New Investigations of Marx’s Method (1997), Heterodox Economic Theories: True or False? (1995), and Marx’s Theory of Money: Modern Reappraisals. He has also published numerous articles on Marxian economics in scholarly journals, including the American Economic Review, the Cambridge Journal of Economics, and the Review of Radical Political Economics.

Tony Smith is a Professor of Philosophy at Iowa State University. His books include The Logic of Marx’s Capital: Replies to Hegelian Criticisms (1990), Technology and Capital in the Age of Lean Production (2000), and Globalisation: A Systematic Marxian Account (2005).

“The older debates about Marx’s Hegelianism were generally conducted under the sign of idealism and its denunciation; today probably it is vitalism that is the more significant issue. But in the newer Marxian investigations, Hegel’s Logic is grasped as a theoretical anticipation of the complex and dialectical forms taken by capital itself. This is the sense in which, retroactively, Hegel is reread through Marx and not the other way round. As one of these contributors puts it, Hegel becomes an appropriate reference because it is capital itself which is ‘idealistic’. At any rate, this stimulating volume offers a rich sampling of the newer approach and the insights it provides to Marx himself.”
– Prof. Fredric Jameson, Duke University
Acknowledgements


I. IDEALISM AND MATERIALISM

1. Hegel, Marx and the Comprehension of Capitalism
Tony Smith

3. Dialectics on its Feet, or the Form of the Consciousness of the Working Class as Historical Subject
Juan Iñigo Carrera

4. Which ‘Rational Kernel’? Which ‘Mystical Shell’? A Contribution to the Debate on the Connection between Hegel’s Logic and Marx’s Capital
Gastón Caligaris and Guido Starosta

5. The Universal and the Particulars in Hegel’s Logic and Marx’s Capital
Fred Moseley

7. Lost in Translation: Once Again on the Marx–Hegel Connection
Riccardo Bellofiore

9. ‘The Circular Course of Our Representation’: ‘ Schein’, ‘ Grund’ and ‘ Erscheinung’ in Marx’s Economic Works
Igor Hanzel


III. DIFFERENT VIEWS OF THE DIALECTIC

10. An Outline of the Systematic-Dialectical Method: Scientific and Political Significance
Geert Reuten

12. Dialectics of Labour and Value-Form in Marx’s Capital: A Reconstruction
Mario L. Robles-Báez

Marxian economists, philosophers, and graduate students around the world.