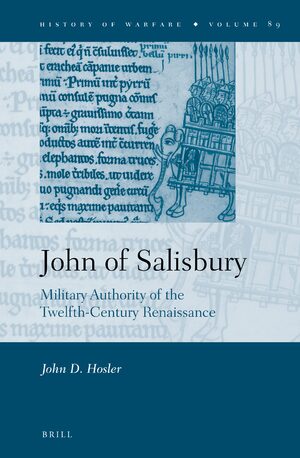 Military Authority of the Twelfth-Century Renaissance

Author: John Hosler
The English scholar John of Salisbury was a major intellectual of the twelfth century whose contributions to the fields of education, grammar, political theory, and rhetoric are well-known. His significance is amplified further in John of Salisbury: Military Authority of the Twelfth-Century Renaissance, in which John D. Hosler examines his heretofore overlooked contributions to the ideals and practice of medieval warfare. This book surveys an array of military topics present within John’s extant corpus, including generalship, strategy, tactics, logistics, military organization, and training; it also collates John’s military lexicon and charts the influence of classical texts upon his conceptualization of war. John of Salisbury, it argues, deserves inclusion in the roll-call of military theoreticians and writers of pre-Reformation Europe.
E-Book (PDF)

€117.00$143.00
​
Add to Cart
John D. Hosler, Ph.D. (2005), University of Delaware, is Associate Professor of British History at Morgan State University in Baltimore, MD. Specializing in medieval French and English warfare, he is the author of Henry II: A Medieval Soldier at War, 1147-1189 (Brill, 2007).
"...a very successful book. Hosler deserves great credit for so cogently demonstrating the importance of John of Salisbury as military thinker and reliable source regarding contemporary ideas about the conduct of war and our own understanding of them. One hopes his book will be a model for future studies of other medieval writers that will further illuminate the significance of military education in the medieval period. I recommend this text both to specialists and to medieval scholars generally."
Review by David S. Bachrach, The University of New Hampshire, in Michigan War Studies Review, 2013-100, 16 December 2013.

"In this fine book, Hosler provides a fascinating study of the ways in which a twelfth-century scholar viewed war. While John of Salisbury’s writings on military matters are very unlikely to have influenced the practice of war, this excellent study has illuminated a neglected aspect of his thought, one conditioned far more by his reading of the classics than by his knowledge of contemporary events and practices".
Review by Michael Prestwich, University of Durham, in Journal of Military History, 78/1, 2014, 347-8

"...a very impressive, insightful, and well-researched book. Hosler's volume should be indispensable reading not only by John of Salisbury scholars (a small group, to be sure), but also by an audience of military, intellectual, and political historians interested in the twelfth century."
Review by Cary J. Nederman, Texas A&M University, in Mediaevistik, 27, 2014, 367-369
Acknowledgements … ix
Abbreviations … xi

Specialists in medieval warfare, intellectual history, and military historians in general, as well as post-graduate students in English history and academic libraries and institutes.