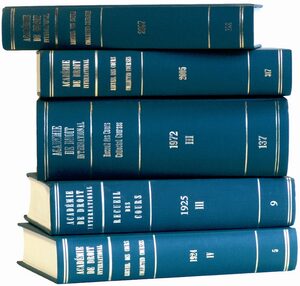 Author: Académie de Droit International de la Haye
The Quest for World Order and Human Dignity in the Twenty-first Century: Constitutive Process and Individual Commitment. General Course on Public International Law by W. M. Reisman, Professor at the Yale Law School
International law's archipelago is composed of legal "islands", which are highly organized, and "off-shore" zones, manifesting a much lower degree of legal organization. Each requires a different mode of decision-making. This General Course is concerned, first, with understanding and assessing the aggregate performance of the world constitutive process, in present and projected constructs; second, with providing the intellectual tools that can enable those involved in making decisions to be more effective, whether they are operating in islands or off-shore; and, third, with inquiring into ways the international legal system might be improved.
Hardback