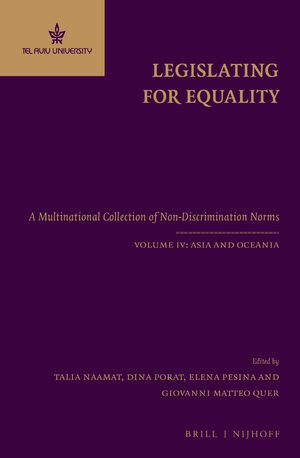 Editors: Talia Naamat, Dina Porat, Elena Pesina, and Giovanni Matteo Quer
Legislating for Equality – a Multinational Collection of Non-Discrimination Norms is a compilation of national constitutional provisions and laws on non-discrimination and the promotion of equality. The aim of the book, divided into four volumes, is to provide a comprehensive overview of the legal frameworks of all UN Member States on matters relating to discrimination on the basis of race, religion and ethnicity, prohibition of hate crimes and "hate speech". Each volume also includes relevant international and regional treaties and ratification tables. The first volume on Europe was published in August 2012. The second volume on the Americas was published in 2013, and the third volume on Africa was published in 2016. In this final volume of the series, we turn our attention to Asia and Oceania.
E-Book (PDF)

€373.00$448.00
​
Add to Cart
Talia Naamat, LL.B., Adv. (2004, Bar Ilan University) and a Master’s degree in Comparative religion (2015, Tel Aviv University), is an attorney and legal researcher in the field of comparative human-rights and international law at the Kantor Center for the Study of Contemporary European Jewry.

Dina Porat, Ph.D. (1984) in History, is Head of the Kantor Center for the Study of Contemporary European Jewry, incumbent of the Alfred P. Slaner Chair for the Study of Racism and Antisemitism at Tel-Aviv University and Chief Historian of Yad Vashem. She has published many books and articles, the most recent of which is the Fall of the Sparrow – The Life and Times of Abba Kovner (Stanford UP, 2009), a 2010 National Jewish Book Award winner.

Elena Pesina, Law Degree (2003, Higher School of Economics, Moscow, Russia) and an LL.M. in Global Governance and Human Rights (2016, Tel Aviv University). She is currently pursuing a Ph.D. in International Law at the University of Auckland (New Zealand).