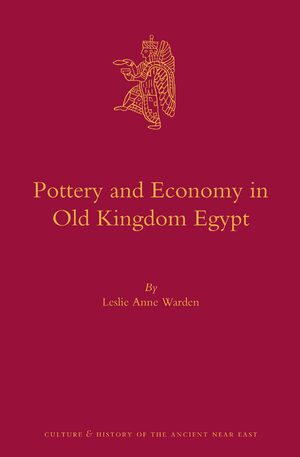 Author: Leslie Anne Warden
In Pottery and Economy in Old Kingdom Egypt, Leslie Anne Warden investigates the economic importance of utilitarian ceramics, particularly beer jars and bread moulds, in third millennium BC Egypt. The Egyptian economy at this period is frequently presented as state-centric or state-defined. This study forwards new methodology for a bottom-up approach to Egyptian economy, analyzing economic relationships through careful analysis of variation within the utilitarian wares which formed the basis of much economic exchange in the period. Beer jars and bread moulds, together with their archaeological, textual, and iconographic contexts, thus yield a framework for the economy which is fluid, agent-based, and defined by small scale, face-to-face relationships rather than the state.
E-Book (PDF)

Archaeologists, graduate students in Egyptology and anthropology, academic institutes and libraries, and anyone interested in the Egyptian Old Kingdom or the structuring of pharaonic society.