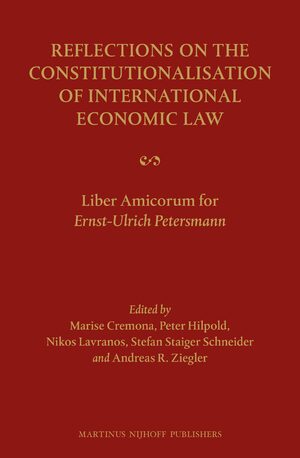 Reflections on the Constitutionalisation of International Economic Law

Volume Editors: Marise Cremona, Peter Hilpold, Nikolaos Lavranos, Stefan Staiger Schneider, and Andreas Ziegler
This book collects a large number of essays written in honour of Professor Ernst-Ulrich Petersmann by his friends, colleagues and former students. The respective contributions cover the fields of international economic law, international constitutional law/transnational constitutionalism, EU law and human rights. The broad thematic scope of this book mirrors the extremely large field of interests of the jubilarian. Paying tribute to a particular trait of Professor Petersmann´s character who was always both a dogmatic thinker and a curious researcher, the authors try to cover both structural issues of law as well as most recent developments, in particular in the field of international economic law. “Construing” the constitution of international economic law, in both senses of this activity, was an aim throughout Professor Petersmann´s academic career and this goal stands also at the heart of this book.
E-Book (PDF)

Peter Hilpold is Professor of International Law, European Law and Public Comparative Law at the Faculty of Law of the University of Innsbruck (Austria). He has published extensively on the subjects mentioned. He is an editor and/or a permanent collaborator of several international law journals.

Nikos Lavranos is Dr. jur. (2004) and LLM (1997) both from Maastricht University (Netherlands). Currently, he is Senior Trade Policy Advisor, prior he was Senior Researcher International Law & EU Law. He has published widely on EU Law, WTO Law and Investment Law.

Stefan Staiger Schneider is PhD Researcher in Law at the European University Institute in Florence (Italy) and MAE-AECI Fellow (Spain). He is also a Master of European Studies from the University of Hamburg (Germany) and a Bachelor of Laws from the Pontifical Catholic University of Rio Grande do Sul in Porto Alegre (Brazil).

Liberalization of Trade in Goods in the EEC: Origin and Early Evolution
Federico Ortino

Constructing a ‘We’: Collective Agency and the European Union
Pedro Lomba

International Regulatory Policy and Democratic Accountability: The EU and the ACTA
Marise Cremona

Justice is Coming (… From Behind Closed Doors: The WTO Judges)
Petros C. Mavroidis

Still Going “Grey” After All These Years? Export-Restraint Agreements and the WTO
Antonello Tancredi

Nature and Status of WTO Accession Commitments: “WTO-Plus”Obligations and Their Relationship to Other Parts of the WTO Agreement
Lothar Ehring

Is TRIPS Innovative Enough? How to Reconcile IP, Innovation and Health
Daniel Kraus

The Future of International Investment Protection Law: The Promotion of Sustainable (Economic) Development as a Public Good
Ilze Dubava

Diplomatic Conciliation of Investment Disputes: The Italian-Swiss Controversy on Secondary Residences in Engadine (1990–1992) and Its Lessons
Giorgio Sacerdoti

Product Labelling 15 Years On: The Role of the Judiciary
Arthur E. Appleton

The Right to Water: Effective Multi-Level Protection of a Multi-Faceted Human Right? – An Application of the Kadi and Medellin Approaches to the Case of the Right to Water
Pierre Thielbörger

Consumer Labelling on Trial at the WTO: Misunderstanding the Behavioural Law and Economics of Consumer Information
Robert Howse