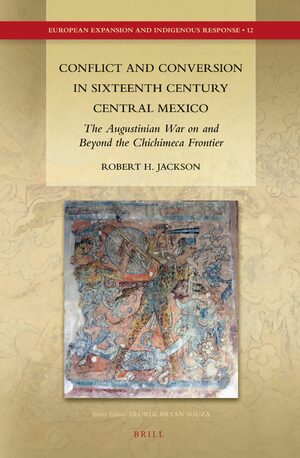 The Augustinian War on and Beyond the Chichimeca Frontier

Author: Robert H. Jackson
In the sixteenth century Franciscan, Dominican, and Augustinian missionaries attempted to convert the native populations of central Mexico. The native peoples generally viewed the new religion in terms very different from that of the missionaries. As conflict broke out after 1550 as Spaniards invaded the Chichimeca frontier (the frontier between sedentary and nomadic natives), the missionaries faced new challenges on both sides of the frontier. Some sedentary natives resisted evangelization, and the missionaries saw themselves in a war against Satan and his minions. The Augustinians assumed a pivotal role in the evangelization campaign on both sides of the Chichimeca frontier, and employed different methods in the effort to convince the natives to embrace the new faith and to defeat Satan’s designs. They used graphic visual aids and the threat of an eternity of suffering in hell to bring recalcitrant natives, such as the Otomi of the Mezquital Valley, into the fold.
E-Book (PDF)

€125.00$163.00
​
Add to Cart
Robert H. Jackson, Ph.D. (1988) University of California, Berkeley, is Professor of International Relations and Latin American Studies at Alliant International University, Mexico City, and Program Director of the Alliant School of Management. He has authored, co-authored, edited, and co-edited 11 books and more than 60 journal articles.
[...] [S]pecialists will certainly value this engagingly written and wide-rangong study and the author's decision to adopt a historical approach to a topic that, still in its infancy, has attracted mostly the attention of art historians. It also bears repeating that this is a beautifully illustrated monograph.
Andrew B. Fisher, Itinerario, Vol. 38, No. 1 (2014), pp. 174-176

"In this wonderfully illustrated monograph, Robert H. Jackson departs from his usual focus on late colonial Spanish-American frontier missions to examine sixteenth-century murals executed on the walls of Augustinian conventos in the modern Mexican states of Hidalgo and Michoacán. [...] Jackson makes an important contribution to the extensive literature examining the evangelisation of native peoples in sixteenth-century Mexico."
- Verónica A. Gutiérrez (Azusa Pacific University), ThE English Historical Review, CXXX. 542 (February 2015)
General Editor’s Preface
List of Tables, Figures and Map
Preface: Genesis of a Question and Interpretation
Acknowledgement

2. Setting the Stage: Native Peoples and Augustinian Missions in Central Mexico and Beyond the Chichimeca Frontier

3. The War against Satan and Sin: The Open Chapel Murals of San Nicolás Tolentino and Santa María Xoxoteco

4. The Holy War against the Chichimecas: The Ixmiquilpan Church Mural Series

5. Beyond the Chichimeca Frontier: Augustinian Evangelization of the Sierra Gorda, Sixteenth to Eighteenth Centuries