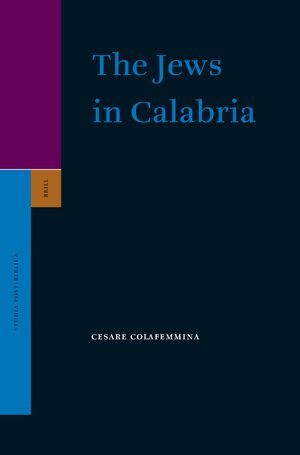 The Jews in Calabria

Author: Cesare Colafemmina
This volume of the Documentary History of the Jews in Italy illustrates the history of the Jews in Calabria from the end of the fourth century, where the first archaeological evidence of their presence appears, to 1541. Between the fourth and tenth centuries, there is a gap in the evidence while the first documentary records appear in the eleventh century, dating from Norman times. The Normans were succeeded by the Hohenstaufen, who were subsequently replaced by the Angevins and, in 1438, by the Aragonese. Under the Aragonese the Jewish community grew and flourished, reinforced by refugees from the Iberian Peninsula and Sicily. It was at that point that the Jewish population of Calabria reached its maximum expansion and there was a Jewish presence in most townships and many villages until their expulsion by Emperor Charles V in 1540.

The documents in this volume describe the political, economic, and social aspects of Jewish life in Calabria primarily between 1438 and 1540. The documents are preceded by an introduction, outlining the history of the Jews in Calabria and have been furnished with summaries and references, providing a useful tool for further research. In addition a bibliography, list of sources, abbreviations, and indices are included.
E-Book

€240.00$298.00
​
Add to Cart
Cesare Colafemmina was Professor of Jewish Epigraphy and Antiquities at Bari University and of Jewish Literature at Calabria University. He has published extensively on the epigraphy and the history of the Jews in Southern Italy. In 1985 he founded the Bulletin “Sefer Yuḥasin” dedicated to texts and studies on the Jews in what later became the Kingdom of the Two Sicilies.
Preface
Introduction
Acknowledgements
Bibliography
Sources and Abbreviations
Documents
Indexes
Index of Persons
Geographical Index
Subject Index.
Errata et Corrigenda