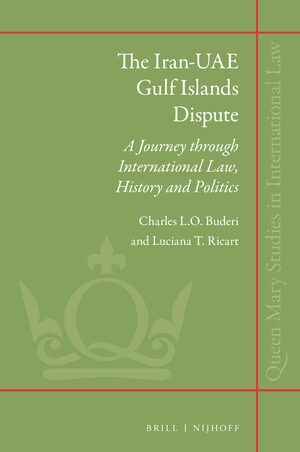 A Journey Through International Law, History and Politics

Series:  Queen Mary Studies in International Law, Volume: 29
Authors: Charles L.O. Buderi and Luciana T. Ricart
In The Iran-UAE Gulf Islands Dispute, Charles Buderi and Luciana Ricart take the reader on a journey through centuries of Gulf history and evolving principles of international law on territorial disputes to reach conclusions over the rightful sovereign of three Gulf islands – Abu Musa and the Tunbs – claimed by both Iran and the United Arab Emirates. Drawing on a wide range of scholarly works and archival documents from sources as diverse as the Dutch East India Company, the Ottoman Empire and the British Government, Buderi and Ricart analyze historical events from antiquity up to modern times. Ultimately, the authors reach conclusions on the ownership of the islands under international law which challenge the positions of both parties.
E-Book (PDF)

€359.00$431.00
​
Add to Cart
Charles L. O. Buderi practices international law and arbitration in London. He has degrees in Middle East Studies and law from the University of California, Berkeley, and a post-graduate degree in international and comparative law from Georgetown University.

"Perhaps the greatest strength of the book is the discussion of a number of new revelations about the history of the [Gulf] islands and the claims to sovereignty over them, supported by archival research that will prove useful to both law and history scholars. It will be useful to readers practising in international tribunals and teaching international law and the politics of the Middle East." - P. Sean Morris, University of Helsinki, Finland
All interested in public international law (territorial disputes and treaties) and the politics and history of the Gulf region and the Middle East, including students, academics and government/foreign ministry officials.