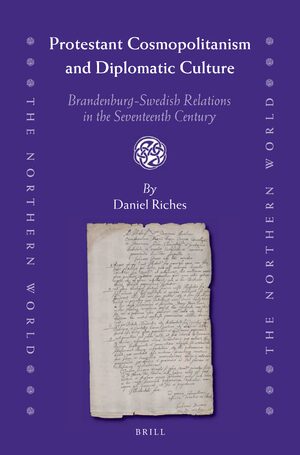 Brandenburg-Swedish Relations in the Seventeenth Century

Author: Daniel Riches
In Protestant Cosmopolitanism and Diplomatic Culture, Daniel Riches investigates seventeenth-century Brandenburg-Swedish relations to present an image of early modern diplomacy driven by complex networks of individuals whose activities were informed by their educational backgrounds, intellectual and cultural interests, religious convictions, and personal connections. The Brandenburg-Swedish relationship was crafted not only by formally-credentialed diplomats, but also by an array of officers, bureaucrats, clergymen, merchants and scholars who conversed in the symbolic language of a common diplomatic culture and a worldview of Protestant cooperation across lines of political and denominational difference. The image of diplomacy that emerges is not one of bilateral contact between states, but rather zigging and zagging across multiple intersecting networks and ever-shifting constellations of religion, politics and culture.
E-Book (PDF)

€151.00$195.00
​
Add to Cart
Daniel Riches, Ph.D. (2007), University of Chicago, is Assistant Professor of History at the University of Alabama. He has published a number of articles, chapters, and reviews on early modern European history.
Abbreviations ... vii
Acknowledgements ... ix

Scholars of early modern Europe, particularly of Germany/Prussia or Scandinavia; historians of diplomacy; those interested in the interplay religion-politics and/or role of religion, culture, and interpersonal networks in international relations.