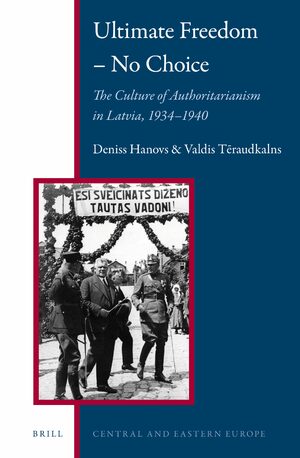 Authors: Deniss Hanovs and Valdis Tēraudkalns
The Republic of Latvia is a fascinating mirror of the development of European democratic culture and reflects both the rise of democracy in Eastern Europe after the end of World War I and its deterioration into authoritarianism in the early 1930s.
The regime, which lasted for only six years (1934-1940), was shaped by the controversial figure of Prime Minister and Leader of the People (Vadonis) Karlis Ulmanis.
This new, archive-based study illustrates the development of authoritarianism in the region, shows controversies and similarities and places the regime's leader in the international context of European authoritarian culture. The book shows how mass culture and technologies, ancient drama and European modernism were combined to reinforce the idea of legitimacy of a new non-democratic regime.
E-Book

Deniss Hanovs, Ph.D. (2003) on media as a tool for national movement in 19th century Latvia, is Associate Professor in Communication at Rīga Stradiņš University (Latvia)

Introduction
Chapter 1: The Beginning: How Was The Coup Presented Back Then?
Inter-war Latvia – pre-history of the Coup, its context
Why the Coup is Not a Coup, but Salvation?
Ulmanis in Foreign Media: The Times
Chapter 2: Genesis of a Political Myth – an Official Turns into Vadonis
Chapter 3: Staging Atdzimšanas Dziesma – Technologies of Authoritarianism Cultural Policy

How to Stage the Principle of Authoritarianism? Staging of a Mass Performance as a Political Program

“Atdzimšanas Dziesma will invite every Latvian to serve his nation and country by obeying Vadonis.” What is the Staging Going to Say?
“Atdzimšanas Dziesma depicts the fate of the Latvian people” Staging as a Liturgy of Authoritarianism. Vadonis as a Priest and Actor
Chapter 4: “Another Land”: Latgale Region in the Discourse of Ulmanis’ Authoritarian Regime on the Unity of the Nation
Political Performance as a Staging of Unanimity
Latgale: The Symbolic Stepchild and Bride
Latgalians and Ethnic Unity
Latgalians and Ethnic Diversity – The Other in the New Political Culture
Answers of Latgale’s Media
Education Law and Technology of the Melting Pot
Daugavpils Vienības Nams – An Edifice as a Political Message

Chapter 5: The Leader, the Enemy, War and Celebration – Authoritarianism Practices Compared: Stalin and Ulmanis in Latvia’s Authoritarian Culture
USSR – The Land of Workers and Violence. Dual Perception
Cultural Practices of European Dictatorships in the 30ies
Stalin and Ulmanis: A Functional Comparison of Leaders
The Enemy: Communism and A War of Civilizations
Moscow Trials – the Globalized Political Show of the 30ies
Chapter 6: Date and Place: Celebration of Authoritarianism in Rēzekne and Riga
“The Harvest Booster” – K. Ulmanis as A Hero of Cyclical Times in “Svēta Zeme” Spectacle
18 November as a Continuation of 15 May. The Course of Celebration on 18 November 1938

Chapter 7: “New Riga”: The City as an Instrument of Authoritarian Ideology

Chapter 8: Authoritarianism and the Church: Attempts to Develop Latvian Christianity in 1920ies and 1930ies

All those interested in interwar and Eastern European history