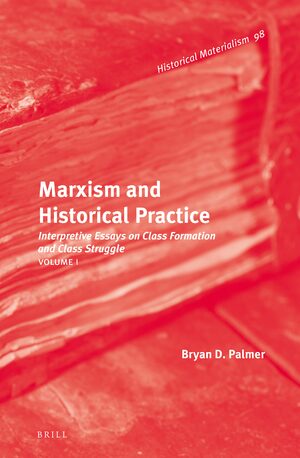 Marxism and Historical Practice (Vol. I)

Interpretive Essays on Class Formation and Class Struggle. Volume I

Author: Bryan D. Palmer
The two volumes of Marxism and Historical Practice bring together essays written by one of the major Marxist historians of the last fifty years. The pieces collected in Volume I, Interpretive Essays on Class Formation and Class Struggle, offer a stimulating, empirically grounded survey of North American collective behaviour, popular mobilizations, and social struggles, ranging from a rich discussion of ritualistic protest like the charivari through the rise of the Knights of Labor in the 1880s to campaigns against neoliberal labour reform in British Columbia in the early 1980s. What emerges is Palmer's sustained reflection on long-standing interpretive historical problems of class formation, the dynamics of social change, and how popular social movements arise and relate to law, the state, and existing cultural contexts.
E-Book (PDF)

€168.00$221.00
​
Add to Cart
Bryan D. Palmer, Ph.D. (1977), SUNY-Binghamton, is Canada Research Chair in the Department of Canadian Studies, Trent University. His prize-winning monographs, edited collections, and articles on the history of labour and the left, and historiography and theory, have been translated and published in Greek, Korean, Spanish, Portuguese, Italian, and other languages. Among his many books are James P. Cannon and the Origins of the American Revolutionary Left, 1890-1928 (UI Press, 2007) and the Brill-published Revolutionary Teamsters: The Minneapolis Truckers’ Strikes of 1934 (2013).
Acknowledgements
Introduction

PART I: CLASS STRUGGLE BEFORE THE CONSOLIDATION OF CLASS
1. Discordant Music: Charivaris and Whitecapping in Nineteenth-Century North America
2. Popular Radicalism and the Theatrics of Rebellion: The Hybrid Discourse of Dissent in Upper Canada in the 1830s

PART II: WORKERS’ CULTURES, STRUGGLES, AND MOBILISATIONS IN THE AGE OF CAPITALIST CONSOLIDATION, 1860–1920
3. In Street and Field and Hall: The Culture of Hamilton Workingmen, 1860–1914
4. The Bonds of Unity: The Knights of Labor in Ontario, 1880–1900
5. Class, Conception and Conﬂict: The Thrust for Efficiency, Managerial Views of Labour, and the Working Class Rebellion, 1903–22

PART III: CLASS STRUGGLE IN THE AFTERMATH OF THE POST-WAR SETTLEMENT
6. Wildcat Workers in the 1960s: The Unruly Face of Class Struggle
7. British Columbia’s Solidarity: Reformism and the Fight Against the Right

PART IV: REMAPPING THE LANDSCAPE OF CLASS FORMATION: COMPARISONS AND CONJUNCTURES IN LABOUR HISTORY’S TELESCOPED LONGUE DURÉE
8. Social Formation and Class Formation in North America, 1800–1900
9. ‘Cracking the Stone’: The Long History of Capitalist Crisis and Toronto’s Dispossessed, 1830–1930
10. What’s Law Got to Do with It? Historical Considerations on Class Struggle, Boundaries of Constraint, and Capitalist Authority

References
Index
All interested in Marxist history and theory; social and labour history; history of the revolutionary left; class formation and class struggle; and history of Canada, the United States, the United Kingdom.