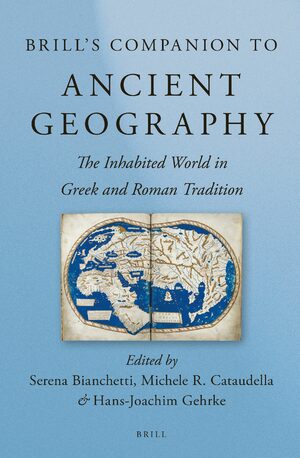 The Inhabited World in Greek and Roman Tradition

Editors: Serena Bianchetti, Michele Cataudella and Hans-Joachim Gehrke
Brill's Companion to Ancient Geography edited by S. Bianchetti, M. R. Cataudella, H. J. Gehrke is the first collection of studies on historical geography of the ancient world that focuses on a selection of topics considered crucial for understanding the development of geographical thought. In this work, scholars, all of whom are specialists in a variety of fields, examine the interaction of humans with their environment and try to reconstruct the representations of the inhabited world in the works of ancient historians, scientists, and cartographers. Topics include: Eudoxus, Dicaearchus, Eratosthenes, Hipparchus, Agatharchides, Agrippa, Strabo, Pliny and Solinus, Ptolemy, and the Peutinger Map. Other issues are also discussed such as onomastics, the boundaries of states, Pythagorism, sacred itineraries, measurement systems, and the Holy Land.

Michele R. Cataudella has been Professor of Greek History since 1968. He first taught Greek History and then Ancient Oriental History at the University of Catani and became full professor of Greek History at the University of Florence in 1981 where he taught until 2010. Prevalent themes in his research include: economics and public finance in the ancient world, Mycenaean society and the relations between Greece and the East, ancient historiography and geography, the fourth century CE. He has been editor of SILENO. Rivista di studi classici e cristiani since 1981 and is a member of the Société Nationale des Antiquaires de France since 2001.

Hans-Joachim Gehrke specializes in Ancient History and participates in research and teaching at several universities in Germany, Italy, Switzerland and, especially, in Freiburg. He is a member, inter alia, of the Heidelberg Academy of Sciences and Humanities, the German Academy of Sciences Leopoldina, the Academia Europaea and the American Institute of Archaeology. For the past few years, he has been President of the German Archaeological Institute. He is the author of many books, in particular: Jenseits von Athen und Sparta (München, 1986), Geschichte des Hellenismus (München, 1990), Alexander der Grosse (München, 1996), and Demokratie in Athen (Berlin, 2002).