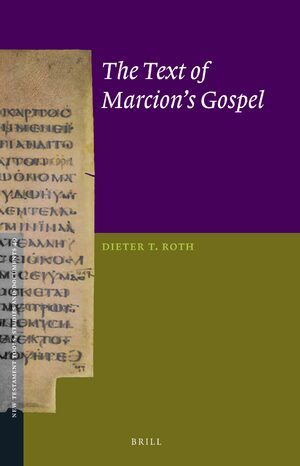 The Text of Marcion’s Gospel

Author: Dieter T. Roth
In The Text of Marcion’s Gospel Dieter T. Roth offers a new, critical reconstruction of Marcion’s Gospel including various levels of certainty for readings in this Gospel text. An extensive history of research, overview of both attested and unattested verses in the various sources, and methodological considerations related, in particular, to understanding the citation customs of the sources set the stage for a comprehensive analysis of all relevant data concerning Marcion’s Gospel. On the basis of this new reconstruction significant issues in the study of early Christianity, including the relationship between Marcion’s Gospel and Luke and the place of Marcion in the history of the canon and the formation of the fourfold Gospel, can be considered anew.
E-Book (PDF)

€167.00$235.00
​
Add to Cart
Dieter T. Roth, Ph.D. (2009), University of Edinburgh, is Wissenschaftlicher Mitarbeiter at the Johannes Gutenberg-Universität Mainz. He has published numerous contributions to edited volumes and articles on Marcion’s Gospel.
' This comprehensive and admirable study offers a solid foundation for further investigations. Anyone who chooses to take issue with the reconstructions advanced here will need to justify them as compellingly as the discussions in Roth’s commentary. At a time when Marcion has again risen to the forefront of scholarly attention, the present volume is set to be a contribution of lasting value.'
https://www.bookreviews.org/pdf/10399_11544.pdf

' Roth accomplishes what will become the standard edition of Marcion’s Gospel. [...] a very valuable contribution to the discussion about Marcion and his significance for interrelationships between his and the canonical New Testament gospels [...] He is very much thanked for having accomplished an indispensable tool.'
Thomas J. Kraus, University of Zürich, TC: A Journal of Biblical Textual Criticism, 2017. http://rosetta.reltech.org/TC/v22/TC-2017-Rev-Roth-Kraus.pdf

'...a magnificent achievement. The text [...] will now replace that of von Harnack, and will no doubt be much photocopied by New Testament scholars and patrologists for decades to come. [...] method and textual commentary will be widely read.'
Simon Gathercole, Cambridge, Journal of Ecclesiastical History, Vo. 68 No. 1, January 2017
' Roth's work is a model of methodological rigor [...] an indispensable tool for any future study of Marcion's Gospel. [...] offers a comprehensive history of scholarship and an invaluable collection of primary evidence presented in an accessible format.' Ian N.Mills, Duke University, Gnosis, volume 3, number 2 (2018)

"Dieter T. Roth is to be commended for his reconstruction of Marcion’s Gospel. His meticulous citation habits, knowledge of his sources, and
cautious discussion engender trust for his textual decisions. Although it is a book for specialists, The Text of Marcion’s Gospel is sure to be a standard reference work for those studying Marcion, textual criticism, and second-century Christianity for many years." – Elijah Hixson, University of Edinburgh, in: Journal of the Evangelical Theological Society, March 2016

"authoritative reference work [...] new and significant contribution to scholarship by presenting a reconstructed text of Marcon's Gospel based on a rigorous and thoroughgoing source and text-critical method. [...] major piece of scholarship, which will be consulted widely for many decades to come." – Paul Foster, University of Edinburgh, in: The Expository Times 127/2

Academic libraries, specialists in early Christianity, NT textual critics, and scholars interested in the variety of issues related to the Gospels in the second century.