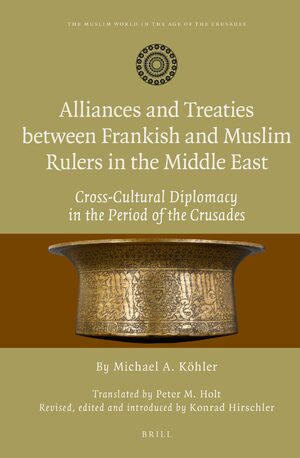 Cross-Cultural Diplomacy in the Period of the Crusades. Translated by Peter M. Holt. Revised, edited and introduced by Konrad Hirschler

Editors: Konrad Hirschler and Peter M. Holt
Author: Michael Köhler
In Alliances and Treaties between Frankish and Muslim Rulers Michael Köhler presents a fully integrated study of Frankish-Muslim diplomacy in the period from the First Crusade through to the thirteenth century. It is a ground-breaking study that challenges preconceived notions of the relations between Frankish and Muslim rulers in the Middle East. Commonly portrayed as an era of conflict, the period appears here as one in which conventions of diplomatic cooperation were commonplace. This book is one of the few works in the fields of Crusader Studies and Middle Eastern Studies that draws to the same extent on Arabic and Western sources; two textual traditions that have usually been studied in isolation from each other.
E-Book (PDF)

€156.00$203.00
​
Add to Cart
Michael A. Köhler, Dr. phil. (1987, Hamburg), is Professor for Europe and the Mediterranean at the College of Europe, Bruges, and a senior official of the European Commission, after reading Muslim history at Bonn University (1993-2000). He specialises in and publishes on the crusades and Northern African history.

Konrad Hirschler, Ph.D. (2003, London), is Reader in the History of the Near and Middle East at SOAS, University of London. He has published monographs, edited volumes and articles on medieval Middle Eastern history, including The Written Word in the Medieval Arabic Lands (EUP, 2012).
‘… this book is still a very valuable academic resource; it is full of fascinating material which convincingly dispels the long-held theory that Crusaders and Muslims in the twelfth century had little, let alone, close contact with each other.’
Professor Carole Hillenbrand, University of Edinburgh

'a provocative and important book', 'excellent and insightful work' (Jonathan Phillips, Bulletin of the School of Oriental and African Studies).

'…there is much that is fresh and original about Köhler’s thesis. His insights into the realpolitik underlying the various treaties and alliances of this period are deeply incisive.'
Nicholas Morton in Crusades 13 (2014) p. 268-270.

'It is hoped that this new English translation will be widely read and its ideas far-reaching. This volume is essential for all those interested in the history of the Crusades, the medieval Middle East, and Christian–Muslim relations.'
K. Scott Parker in Al-Masāq 28.1 (2016), 97-99.
DOI: 10.1080/09503110.2016.1152819
Author’s preface to the English translation
Preface
Introduction

I The development of the Syrian system of autonomous lordships (c.1070-1099)
The system of autonomous lordships before the First Crusade (c.1070-1099)
Frankish-Muslim alliances and treaties during the First Crusade (1097-99)
II Relations between the Frankish, Turkish and Arab states in the period of the Syrian autonomous lordships (1098-1158)
The territorial expansion of the Frankish lordships and their integration (1098-1112/13)
The paradigm of the ‘counter-Crusade’: The Syrian lordships and the advance of Turkish allied armies from the east (1098-1128)
Syrian alliance politics from the expansion of the Zengid dominions to the Frankish-Byzantine rapprochement (1128-58)
III Frankish-Muslim relations in the period of Nur al-Din and Saladin (1158-92)
The expansion of the ‘no place’ doctrine and Frankish policy towards Egypt and Byzantium (1158-74)
Franks, Zengids and Nizaris: The Syrian lordships confronting the expansion of the Ayyubid dominions (1174-83)
Between treaty policy and confrontation, subordination and jihad: Frankish-Ayyubid relations from the peak of the party disputes in Jerusalem to the end of Saladin’s life (1184-93)
A glance at Frankish-Muslim relations in the thirteenth century
IV Instruments and implications of Frankish-Muslim legal relations in the Middle East during the twelfth and thirteenth centuries
Technicalities and validity of Frankish-Muslim treaties in the twelfth and thirteenth centuries
The formation and function of Muslim-Frankish condominia (munāṣafāt) in the twelfth and thirteenth centuries

All interested in the history of the Crusades, medieval Middle Eastern history and anyone concerned with the history of relations between Europe and the Islamic world.