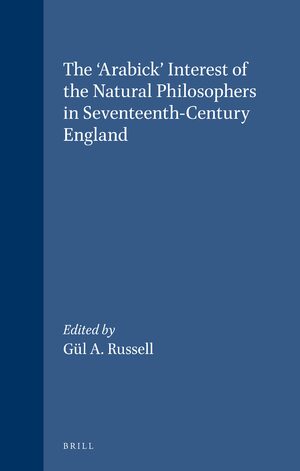 The 'Arabick' Interest of the Natural Philosophers in Seventeenth-Century England

Editor: G.A. Russell
The medieval concern with Arabic is well established. There was, however, a 'second wave' of Arabic interest in seventeenth-century Europe, which is not widely known. The essays in this volume reveal that, contrary to all expectation, the study of Arabic was pursued by a circle of natural philosophers, philologists and theologians in England in close contact with those on the Continent. Arabic was defended as an aid to biblical exegesis and as the key to a 'treasure house' of ancient knowledge. It led to the founding of Arabic chairs at Oxford and Cambridge Universities, endowed by archbishops and merchants. Arabic was taught, along with Hebrew, at Westminster school. Immense collections of Arabic manuscripts were acquired both privately and by libraries, such as the Bodleian at Oxford. They were sought after by natural philosophers in their research in observational astronomy or in the reconstruction of Greek mathematics. Arabic was also part of the Anglican interest in Eastern Churches. In addition to the earlier elegant editions of the Medici Press at Rome, bi-lingual texts, grammars, lexicons, and histories, were published by trained Arabists. Forgeries emerged based on Arabo-Latin alchemical texts. Arabic was included in the concern with a universal philosophical language. Arabic subjects featured extensively in the correspondence of the Royal Society. The impact of translated texts extended to the Quakers as well as to individual figures, such as Locke. In short, at a time when least expected, Arabic interest permeated all levels of English society, encompassing subjects which ranged from science, religion, and medicine, to typography and importing garden plants.
Fourteen historians from different disciplines examine the extent and sources of this phenomenon. Arabic interest is shown to have been a significant aspect of the rise of Protestant intellectual tradition. It was also a major component of University reforms and of secular academic scholarship at Oxford and Cambridge. Thus the period also marks the institutionalisation of Arabic studies.
By identifying many unexpected 'Arabick' strands in the complex skein of seventeenth-century English concerns, this volume opens new lines of investigation and challenges some of the accepted historical interpretations of the period.
E-Book

€130.00$161.00
​
Add to Cart
G.A. Russell, Ph.D. (1962) in Comparative Studies and History and Philosophy of Science is Associate Professor in History of Medicine in the Health Science Center at Texas A&M University and Research Associate at the Wellcome Institute for the History of Medicine, London. She has published on the early history of vision, and psychology. At present she is working on John Locke and Ibn Tufayl's ḥayy ibn Yaqẓān; and the diffusion of the translations of the Arabic text in Europe.
"...the volume represents the most complete account of its subject currently available in English..."
Scott Mandelbrote, ISIS, 1995.

"The book as a whole is based on profound research, well written and edited, and presents its interesting, partly overlapping themes at the best level of the present-day knowledge...the rich information and thought brought into this volume make it a valuable and stimulating exercise in the history and sociology of knowledge."
Lubos Kropacek, Zeitschrift für Geschichte der Arabisch-Islamischen Wissenschaften, 1994.

"...Russell has assembled a stimulating volume."
François Charette, Historical Studies in the Physical and Biological Sciences, 1995.

"This invaluable source-book for the history of Semitics scholarship in Protestant Europe..."
JFE, Journal for the Study of the Old Testament, 1996.

"This picture of the European Renaissance - quite different from the one that is commonly seen - is enough reason to recommend this book very strongly to anyone who has an interest in the history of oriental studies, renaissance Europe, or even general intellectual history."
George Saliba, Journal of the American Oriental Society, 1997.