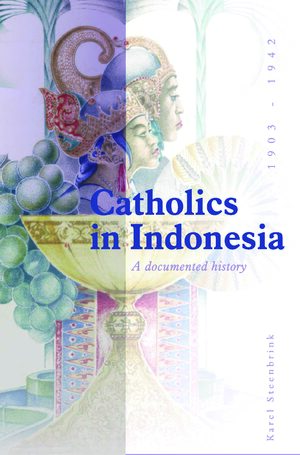 A Documented History. Volume 2: The Spectacular Growth of a Self Confident Minority, 1903-1942

Author: Karel Steenbrink
Indigenous Indonesian Catholics increased in number from 27,000 to nearly 550,000 between 1902 and 1942. At first scattered only through Minahasa, the Kai islands and Flores, after four decades Catholic centres were established in most of the archipelago, and there was even a small but well-educated and vocal minority in Central Java. It is this formative period in the growth of Catholicism in Indonesia that Steenbrink describes in detail.
Catholics never constituted more than three per cent of the Indonesian population, one-third of all Christians. Steenbrink examines the rivalry of this minority with Protestants and their missionary activities, as well as the race with Islam in many parts of the outer islands, which had come under Dutch rule in the early twentieth century. This comprehensive work includes extensive details on the different European missionary orders and missionaries active at this time. Forty archival documents illustrate the proselytizing efforts in the archipelago.
The first volume of Catholics in Indonesia, 1808-1942: A documented history appeared in 2003 ( Volume I: A modest recovery, 1808-1903, KITLV Press).
E-Book

€62.00$83.00
​
Add to Cart
Karel Steenbrink (1942) studied Christian and Islamic theology at the Radboud University of Nijmegen and the Darussalam College of Gontor, Indonesia. In 2003 he published Volume I of Catholics in Indonesia. Karel Steenbrink is professor emeritus of Intercultural Theology at Utrecht University.
"... this work will be an invaluable resource for scholars interested in the history of Catholicism in Indonesia in particular, and the history of religions in South-East Asia more generally" – Paul-François Tremlett, SOAS, London