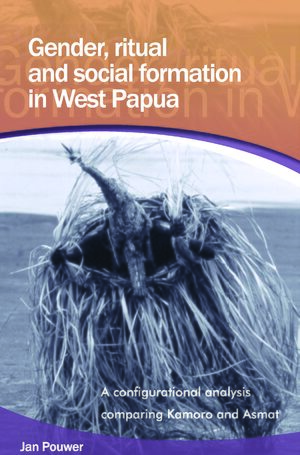 Author: Jan Pouwer
This study, based on a lifelong involvement with New Guinea, compares the culture of the Kamoro (18,000 people) with that of their eastern neighbours, the Asmat (40,000), both living on the south coast of West Papua, Indonesia. The comparison, showing substantial differences as well as striking similarities, contributes to a deeper understanding of both cultures.
Part I looks at Kamoro society and culture through the window of its ritual cycle, framed by gender. Part II widens the view, offering in a comparative fashion a more detailed analysis of the socio-political and cosmo-mythological setting of the Kamoro and the Asmat rituals. These are closely linked with their social formations: matrilineally oriented for the Kamoro, patrilineally for the Asmat. Next is a systematic comparison of the rituals. Kamoro culture revolves around cosmological connections, ritual and play, whereas the Asmat central focus is on warfare and headhunting. Because of this difference in cultural orientation, similar, even identical, ritual acts and myths differ in meaning. The comparison includes a cross-cultural, structural analysis of relevant myths.
This publication is of interest to scholars and students in Oceanic studies and those drawn to the comparative study of cultures.
E-Book (PDF)