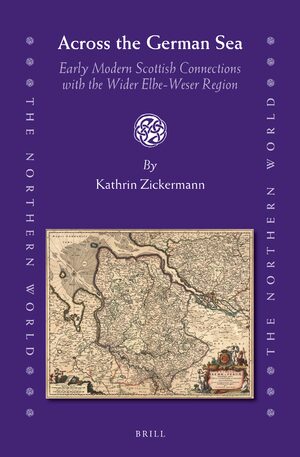 Across the German Sea

Author: Kathrin Zickermann
In Across the German Sea: Early Modern Scottish Connections with the Wider Elbe-Weser Region Zickermann analyses the commercial, maritime and military relations between Scotland and the German cities (Hamburg, Bremen) and territories (Bremen and Verden, Holstein, Braunschweig-Lüneburg) located alongside the lower parts of the rivers Elbe and Weser. Based on a wealth of British, German and Scandinavian archival material, the study demonstrates the importance of the region for Scottish commodity exchange and network building across political borders, whilst contributing significantly to our understanding of the formation of Scottish communities abroad. It also shows that Scottish commercial, political, military and religious activities within the region – which featured a Danish-Norwegian and Swedish dimension - were intertwined and cannot be studied in isolation.
E-Book

€123.00$160.00
​
Add to Cart
Kathrin Zickermann, Ph.D. (2010, University of St Andrews) is a lecturer at the Centre for History at the University of the Highlands and Islands. She specialises in early modern commercial, maritime and migration
history and has published articles in these fields, including ‘Britannia ist mein patria: Scotsmen and the British
Community in Hamburg’, in Grosjean and Murdoch (eds.), Scottish Communities Abroad in the Early Modern Period (Brill, 2005), 249-273.
List of Illustrations ... ix
Acknowledgements ... xi
Abbreviations ... xiii
Stylistic Conventions ... xv

Students and scholars interested in the history of Early Modern Scottish migration and communities, and anyone concerned with the wider Elbe-Weser region or the Thirty Years War.