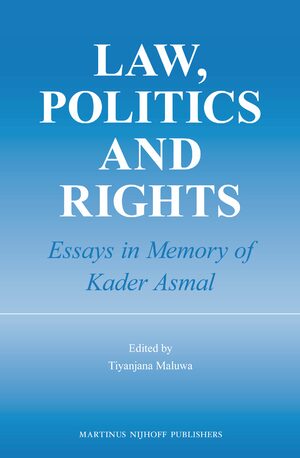 Essays in Memory of Kader Asmal

Editor: Tiyanjana Maluwa
Law, Politics and Rights: Essays in Memory of Kader Asmal presents critical perspectives on various inter-related themes in the areas of human rights, constitutionalism, democracy, international law, political and cultural rights and identity. The discussions reflect the wide-ranging interests and subjects that Kader Asmal engaged with as a legal scholar, human rights campaigner and politician of international renown throughout his life.

Kader Asmal is perhaps best known for his political career as one of the most senior members of the African National Congress and a government minister in post-apartheid South Africa. Less well known to the general public is his equally immense contribution to international human rights law and policy, recognised with the award of the Prix UNESCO in 1983, through more than three decades of an international academic career and legal activism. This book is a reminder of the enduring relevance of the issues and causes he espoused and advocated.

€171.00$212.00
​
Add to Cart
Tiyanjana Maluwa holds the H. Laddie Montague Chair in Law at the Dickinson School of Law of Pennsylvania State University, where he is concurrently Associate Dean for International Affairs of the Law School and Director of the School of International Affairs. Among his extensive publications is International Law in Post-colonial Africa (Kluwer Law International, 1999).
TABLE OF CONTENTS

1. The African Human Rights System for the Protection of Human and Peoples’ Rights: Pan-Africanism, Solidarity and Rights
Federico Lenzerini

4. Democratic Governance and Constitutional Restraint of Presidential and Executive Power: The Challenges in Africa
Muna Ndulo

6. The Politics of Provinces and the Provincialisation of Politics
Nico Steytler

8. The Efficacy of Public Interest Litigation in Ireland
Gerry Whyte


PART III: Right to Self-Determination, Cultural Diversity, and the Politics of International Law-Making and Solidarity

10. Shepherding the Conclusion of Complex International Conventions: The Role of the Chairperson in the Negotiations on Cultural Diversity
Abdulqawi Yusuf and Yuki Daijo

11. The UNESCO Convention on the Protection and Promotion of the Diversity of Cultural Expression and its Operational Guidelines
Souheil el Zein

All interested in politics, human rights, culture, and the role of international law in advancing international cooperation and understanding; politicians, policy makers, students of law and international relations, and anyone with an interest in Africa.