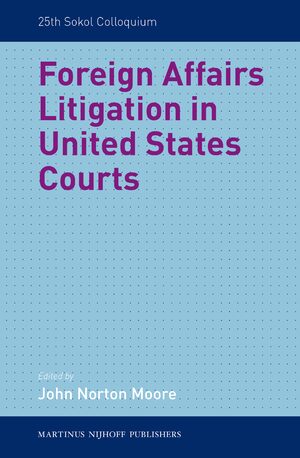 This is an indispensable resource for attorneys and government officials focused on the role of the courts in foreign affairs, actions against foreign governments in United States courts, the Act of State Doctrine, foreign sovereign immunity, the Foreign Claims Settlement Commission, foreign affairs takings actions in the Court of Federal Claims, and choice of court in international litigation.

€121.00$147.00
​
Add to Cart
John Norton Moore is the Walter L. Brown Professor of Law at the University of Virginia School of Law. He also directs the Centers for National Security Law and Oceans Law and Policy. He is a recognized expert on international law and has published extensively.
Preface
Paul G. Mahoney

Foreign Sovereign Immunity and the FSIA

The Role of Courts in Foreign Affairs
Royce C. Lamberth

Policy Options for the Obama Administration: Enforcement Provisions of the Foreign Sovereign Immunities Act as a Tool Against State Sponsors of Terrorism
Steven R. Perles
Edward B. MacAllister

Sovereign Immunity and the International Court of Justice: The State System Triumphant
Paul B. Stephan

Equity, Damages and the Rule of Law
Baher Azmy

Foreign Affairs Takings Actions in the Court of Federal Claims

The Work of the Foreign Claims Settlement Commission of the United States
Timothy J. Feighery

Lawsuits By Foreigners in the U.S. Courts and in the Foreign Claims Settlement Commission
Allan I. Mendelsohn

The Hague Convention on Choice of Court Agreements

The Hague Choice of Court Agreements Convention: A Useful Tool for the Transnational Litigator
David Stewart

Attorneys and government officials will find a vital new contribution to the field in Foreign Affairs Litigation in United States Courts.