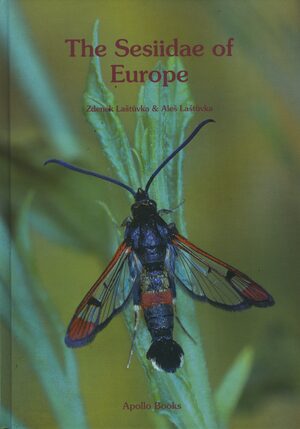 The Sesiidae of Europe

Authors: Zdeněk Laštůvka and Aleš Laštůvka
This is a strongly revised edition of the authors’ An illustrated Key to European Sesiidae published in 1995. This book was printed in a very limited edition and was soon out of print. The Sesiidae of Europe contains comprehensive information on all European species of this Lepidoptera family of day flying moths. All the many taxonomical, biological and distributional changes in the last years are included. Introductory chapters comprise a short historical outline, brief information on the morphology, biology, phylogeny and distribution as well as collecting and rearing methods, and lists of European Sesiidae and their hostplants. Keys to all European genera and species are provided. The main part of the book presents a systematic survey of all European species. Diagnostic morphological characters, bionomics and distribution of each species are shortly described. For each species line drawings of male and female genitalia are given, for some species also of other diagnostic characters. The distribution is illustrated on maps. The book is concluded with 9 excellent colour plates with all European species illustrated.
The following new species are included in this book: Synanthedon geranii Kallies, 1997, Bembecia volgensis Gorbunov, 1994, Synansphecia hispanica Kallies, 1997, Tinthia hoplisiformis (Mann, 1864), Bembecia flavida (Oberthür, 1890) and Chamaesphecia maurusia Püngeler, 1912.
The Sesiidae of Europe will be an important manual for anyone working with this highly interesting and well defined Lepidoptera family. It will serve as a tool not only for identification, but also for future research in biology, distribution and taxonomy as well as conservation of the European Sesiidae.
Hardback