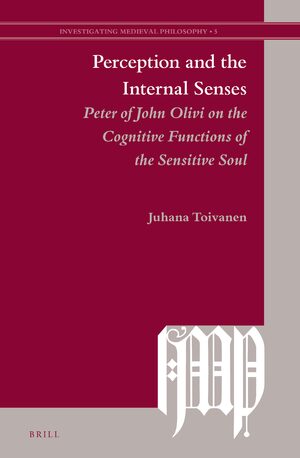 Perception and the Internal Senses

Series:  Investigating Medieval Philosophy, Volume: 5
Author: Juhana Toivanen
In Perception and the Internal Senses Juhana Toivanen advances a detailed philosophical reconstruction of Peter of John Olivi’s (ca. 1248-98) conception of the cognitive psychology of the sensitive (i.e. animal) soul. Like most medieval philosophers, Olivi thought that higher animals and human beings have many psychological capacities in common. The book analyses these capacities by concentrating on Olivi’s conception of the metaphysics of the soul, his theory of perception, and his views about the post-sensory cognitive power which medieval philosophers called the internal senses. Being the first monograph in English that concentrates on Olivi’s philosophical psychology, Perception and the Internal Senses enables us to understand better medieval ideas concerning animal psychology and the human/animal boundary.
E-Book (PDF)

€160.00$193.00
​
Add to Cart
Juhana Toivanen, DSocSc (2009), is a researcher at the University of Jyväskylä and a fellow at the Swedish Collegium of Advanced Studies. He has published several articles on Peter Olivi’s psychology and is currently working on medieval conceptions of human sociability.
Preface ... xi
Abbreviations ... xiii
Introduction ... 1

PART ONE: METAPHYSICS OF THE SOUL
Introduction to Part One ... 21

Specialists in medieval philosophy, those interested in the history of philosophical psychology and the human/animal boundary, and anyone concerned with Peter Olivi’s thought.