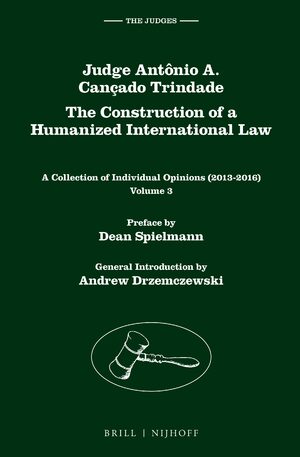 Judge Antônio A. Cançado Trindade. The Construction of a Humanized International Law

Series:  The Judges, Volume: 6
Author: Antônio Augusto Cançado Trindade
This volume is the sixth in the Series The Judges, which collects and synthesizes the opinions of leading international Judges of the contemporary era who have contributed significantly to the progressive development of international law. The current volume contains a selection of the Individual Opinions of Judge Antônio A. Cançado Trindade, former Judge and President of the Inter-American Court of Human Rights, and since 2008 a Judge of the International Court of Justice. Many dwell on aspects of the increased humanization of international law. Elevating this body of norms, which have traditionally focused on purely inter-State relations, to a level where individuals and their suffering (projected in time) become a primary concern, is without doubt Antônio A. Cançado Trindade´s major doctrinal contribution. Revisiting the traditional conceptions of the basis of State responsibility and of jurisdiction, the problems of amnesty laws, the prohibitions of jus cogens, the imperative of access to justice in the light of jus cogens, the obligations erga omnes of protection, the provisional measures of protection, locus standi in judicio and the international legal personality of the human person, jus standi and the international legal capacity of the human person, and developments in reparations, are but a few examples of the themes examined in the learned Opinions expressed by Judge Cançado Trindade at the Inter-American Court of Human Rights. The great achievement of Judge Cançado Trindade at the International Court of Justice has been to draw attention to this dimension, and to further its development in the international case-law, in the light of the universal juridical conscience and stressing the relevance of general principles of international law. In a significant number of cases the World Court acts today as a human rights court, dealing increasingly, albeit under the traditional umbrella of inter-State disputes, with situations that involve human suffering and lead it to find human rights violations. The volume includes a Preface by Dean Spielmann and a General Introduction by Andrew Drzemczewski.

"The [set of] volumes by Judge Antônio A. Cançado Trindade - The Construction of a Humanized International Law - is an important addition to the Series “The Judges”: it portrays Judge Cançado Trindade´s endeavours, marked by deep knowledge and experience in the path towards the realization of international justice. The [ ] volumes are systematically presented, with the learned Individual Opinions of Judge Cançado Trindade covering virtually all chapters, and all the main topics, of contemporary international law. There is ample coherence in the author´s reasoning, going well beyond the settlement of disputes, into saying what the Law is, with close attention to fundamental principles and a substantial doctrinal elaboration, bringing law and justice together. This corresponds to Judge Cançado Trindade´s conception of the proper exercise of the international judicial function. In their preface and general introduction, Judge Dean Spielmann and Dr. Andrew Drzemczewski provide additional elements for a proper understanding of Judge Cançado Trindade´s influential humanist conceptualization. The [ ] volumes are a most valuable contribution to the study of contemporary international law, and are due to become a source of necessary consultation by scholars of the discipline of distinct generations"
From review article in Revista do Instituto Brasileiro de Direitos Humanos, Volume 14, Number 14, 2014 (Professor George R.B.Galindo).
Excerpt of table of contents:
Preface by Dean Spielmann; General Introduction by Andrew Drzemczewski;
PART ONE: INTER-AMERICAN COURT OF HUMAN RIGHTS
I. The Right of International Individual Petition: The Individual’s Locus Standi in Judicio.
II. The Crystallization of the International Legal Personality of the Human Person in Its New Dimension.
III. The Humanization of International Law.
IV. The Centrality of the Suffering of the Victims.
V. Time and Law: The Projection of Human Suffering in Time.
VI. Origin and Basis of the International Responsibility of the State.
VII. Incompatibility of Self-Amnesties with the American Convention on Human Rights.
VIII. The Jus Cogens Prohibition of Torture.
IX. Enforced Disappearance of Persons as a Continuing Violation of Human Rights in Breach of Jus Cogens.
X. The Role of General Principles of Law and the Material Content in Expansion of Jus Cogens.
XI. Access to Justice as an Imperative of Jus Cogens.
XII. Compulsory Jurisdiction of the Inter-American Court of Human Rights under the American Convention on Human Rights.
XIII. Interpretation of the American Convention on Human Rights and Mechanism of Protection Thereunder.
XIV. Basis of the Jurisdiction of the Inter-American Court of Human Rights in Advisory Matters.
XV. Crime of State and Aggravated International Responsibility of the State.
XVI. Reparations for Damage to the Project of Life and to the Project of After-Life (Spiritual Damage).
XVII. Wide Scope of Conventional Obligations of Protection under Human Rights Treaties.
XVIII. The Universal Juridical Conscience and the Right to Cultural Identity.
XIX. The Legal Regime of Provisional Measures of Protection and Their Tutelary Character.
XX. Obligations Erga Omnes of Protection and Drittwirkun g.
PART TWO: INTERNATIONAL COURT OF JUSTICE
I. The Presence of the Human Person in the Essence of Inter-State Disputes.
II. Territory and People Together: The Overcoming of the Exclusively Territorialist Outlook.
III. Demarcation of Frontiers and Living Conditions of Nomadic Populations.
IV. The Human Ends of the State and Their Projection onto the International Legal Order.
V. The Relevance of Compromissory Clauses in Human Rights Treaties.
VI. The Relevance of Compromissory Clauses in Environmental Law Treaties.
VII. The Primacy of the Right of Access to Justice over State Immunities in Face of International Crimes.
VIII. The Jus Cogens Prohibition of Torture and the Principle of Universal Jurisdiction.
IX. International Legal Personality of Individuals and the Right to Procedural Equality in International Administrative Law.
X. Violations of Human Rights Established by the International Court of Justice.
XI. The Individual as Beneficiary of Reparations in Inter-State Cases.
XII. The Relevance of General Principles of International Law.
XIII. The Autonomous Legal Regime of Provisional Measures of Protection.
XIV. Joinder of Cases.