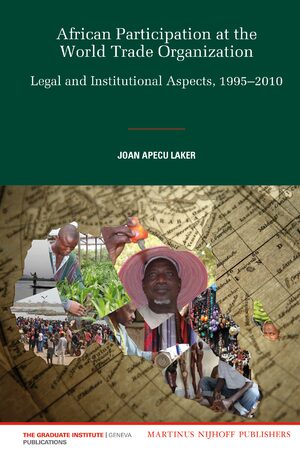 Author: Joan Apecu Laker
On the basis of a systematic accumulation of primary evidence, over a 15-year period, the book describes African trade policy behavior. Through the analysis of original data, African Participation at the World Trade Organization: Legal and Institutional Aspects, 1995-2010 concludes that there is wide scope for improvement in African participation in the WTO. Based on the current transitions in the global economy, the author encourages African Members of the WTO to break from the "inertia of a special and differential exemption orientation", align the trade policy behavior of African Capitals with the Geneva "Frontline"; and, ensure adequacy of deployed resources to three core areas of WTO work: dispute settlement; administration of existing Agreements; and, multilateral negotiations.

Finally, the conclusion identifies a detailed and pragmatic roadmap for African policy makers to maximize the benefits of global trade integration and WTO Membership.

African Participation at the World Trade Organization: Legal and Institutional Aspects, 1995-2010 is a must read for anyone interested in the factors, motivations and explanations that have underpinned the behavior of African countries in the GATT/WTO system of trade rules.

€134.00$160.00
​
Add to Cart
Dr. Joan Apecu Laker is an Economic Affairs Officer in the Council and Trade Negotiations Committee Division of the World Trade Organisation, Geneva, Switzerland. Prior to that (1999-2004) she served in several capacities in the Uganda Law Reform Commission, including as a Senior Legal Officer in charge of Law Reform and Research, where she undertook law reform projects in several branches of the law. Dr. Apecu had an academic attachment with the Permanent Mission of Uganda to the United Nations and Other International Organisations in Geneva Switzerland. She has also been an Assistant lecturer in the Faculty of Law, Uganda Christian University Mukono. She holds a Masters of Law Degree (LLM), Cum Laude, in International Trade and Investment Law, from the universities of Pretoria (South Africa) and the Amsterdam Law School (The Netherlands), a postgraduate diploma in legal practice from the Law Development Centre in Uganda and a Bachelor of Laws degree from Makerere University in Uganda.
"The evidence that Laker has compiled is essential for anyone interested in how developing countries act in the WTO."
Development Policy Review, March 2015