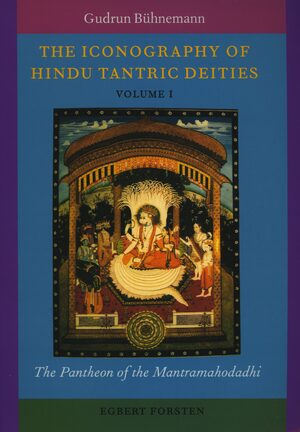 Author: Gudrun Bühnemann
Volume I: The Pantheon of the Mantramahodadhi focuses on the iconography of 108 deities described in the sixteenth-century Mantramahodadhi, which addresses topics related to Tantra, and specifically mantraśāstra, like the function and structure of the deity descriptions ( dhyāna) and the interpretations given to the iconographic attributes. All the deities are presented separately and each entry includes the Sanskrit text in transliteration, a literal translation and notes on the iconography, including information from other Sanskrit texts. With line drawings.
Volume II: The Pantheons of the Prapañcasāra and the Śāradātilaka compares for the first time deity descriptions extracted from different printed editions of two earlier texts, the anonymous Prapañcasāra (c. 10th century) and the Śāradātilaka (c. 10th-11th centuries). The Sanksrit text is presented with a literal translation and remarks on the iconography. A new edition and translation of important chapters (cosmogony and yoga) of the Śāradātilaka is included as appendix. With illustrations.
Paperback