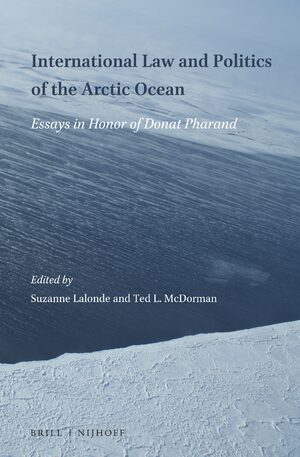 International Law and Politics of the Arctic Ocean

Essays in Honor of Donat Pharand

Editors: Suzanne Lalonde and Ted L. McDorman
International Law and Politics of the Arctic Ocean: Essays in Honor of Donat Pharand is a collection of essays in honor of Professor emeritus Donat Pharand by leading Arctic experts from around the globe. The volume offers a clear, concise and detailed analysis of many of the issues an expanded use of the Arctic Ocean raises and of critical importance for the legal and political processes unfolding in the Arctic region.
E-Book (PDF)

€168.00$213.00
​
Add to Cart
Suzanne Lalonde, Ph.D. (1997), Cambridge University, is Professor of International Law at the Université de Montréal. She has published in both French and English, within Canada and abroad and her research focuses on core international legal principles, especially those pertaining to sovereignty, territory and the determination of boundaries on land and at sea.

Ted L. McDorman, LL.M. (1982), Dalhousie University, is a Professor of Law at the University of Victoria and the author of Salt Water Neighbors: International Ocean Law Relations Between the United States and Canada (Oxford University Press, 2009). He has written widely on ocean law and policy issues including on maritime boundary delimitation and the continental shelf having published over 120 articles and chapters.

Article 234 of the United Nations Convention on the Law of the Sea: Its Origins and Its Future
Armand de Mestral

A Note on the Potential Conflicting Treaty Rights and Obligations between the IMO’s Polar Code and Article 234 of the Law of the Sea Convention
Ted L. McDorman

The United States and Arctic Straits: The Northwest Passage and the Bering Strait
Donald R. Rothwell

The Dog in the Manger – and Letting Sleeping Dogs Lie: The United States, Canada and the Sector Principle, 1924–1955
P. Whitney Lackenbauer and Peter Kikkert

Does Recent Practice of the Russian Federation Point to an Arctic Sunset for the Sector Principle?
Alex G. Oude Elferink

Delineation of the Outer Limits of Canada’s Arctic Ocean Continental Shelf and Its Delimitation with Neighboring States: Does It Matter Which Comes First?
Andrew Serdy

The book will be of value to graduate students, academics, research and teaching institutions, university libraries, government departments and international organizations interested in the Arctic region, the law of the sea, international law and politics.