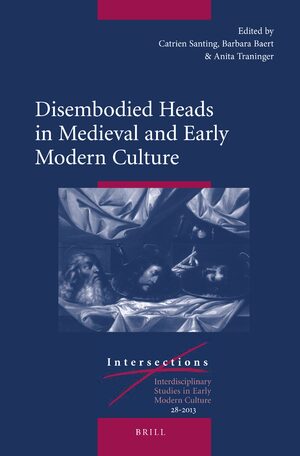 Series:  Intersections, Volume: 28
Editors: Barbara Baert, Anita Traninger, and Catrien Santing
Do heads excite a desire to chop them off; a desire to decapitate and take a human life, as anthropologists have suggested? The contributors to this book are fascinated by ‘disembodied heads’, which are pursued in their many medieval and early modern disguises and representations, including the metaphorical. They challenge the question why in medieval and early modern cultures the head was usually considered the most important part of the body, a primacy only contested by the heart for religious reasons. Carefully mapping beliefs, mythologies and traditions concerning the head, the result is an attempt to establish a ‘cultural anatomy’ of the head, which is relevant for cultural historians, art historians and students of the philosophy, art and sciences of the premodern period.

€144.00$183.00
​
Add to Cart
Catrien Santing (1958), Ph.D. in History, is Professor of Medieval History at the University of Groningen. She has published widely on late medieval and early modern cultural and medical history, including Blood-Symbol-Liquid, together with Jetze Touber, Louvain 2011.

Barbara Baert (1967), Ph.D. in Art History, is Professor of Medieval Art at the University of Leuven. Her research is mainly interdisciplinary, regarding sacred topography, visual anthropology, relics, and female biblical figures such as Mary Magdalene and the woman with the bloodflow. Recently she published Caput Joannis in Disco. {Essay on a Man’s Head}, (Visualising the Middle Age 8), Brill-Leiden, 2012.

Anita Traninger (1969), Ph.D. in Literary Studies, is Einstein Junior Fellow at the Department of Romance Languages and Literatures at Freie Universität Berlin. Her areas of research include the history of rhetoric and discourses of knowledge in early modern Europe, with Disputation, Deklamation, Dialog (Stuttgart 2012) being her most recent book publication.

‘’Disembodied Heads is a valuable addition to the recent chorus of voices raised in unison about the significance of the head in medieval and early modern culture, its implications for understanding the nature of humanity, and the essence of the human spirit.’’
Larissa Tracy, Longwood University. In: Renaissance Quarterly, Vol. 67, No. 3, Fall 2014, p. 1060.

Talking Heads, or, A Tale of Two Clerics
ROBERT MILLS

The Meaning of the Head in High Medieval Culture
ESTHER COHEN

The Johannesschüssel as Andachtsbild: The Gaze, The Medium and the Senses
BARBARA BAERT

Chasing the Caput. Head Images of John the Baptist in a Political Conflict
MATEUSZ KAPUSTKA

Framing the Face. Patterns of Presentation and Representation in Early Modern Dress and Portraiture
BERT WATTEEUW

And I bear your beautiful Face painted on my chest. The Longevity of the Heart as the primal Organ in the Renaissance
CATRIEN SANTING

Index Nominum
All those interested in cultural history and art history of the Pre-Modern Period, the history of the Church, of religion, of philosophy, and of hagiography, as well as Biblical scholars and historian of medicine and the body.