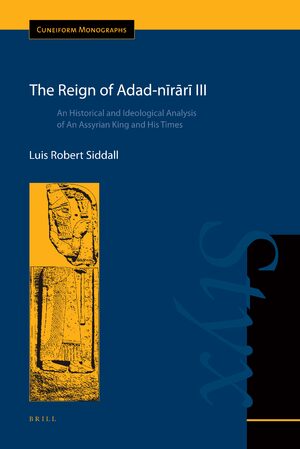 The Reign of Adad-nīrārī III

Author: Luis Robert Siddall
In The Reign of Adad-nīrārī III, Luis Siddall examines the evidence and edits new inscriptions from the king’s reign to investigate the chronology, campaigns, imperial administration and royal ideology of the period. While historians have typically viewed this period as one of turmoil, imperial recession, political weakness and decentralisation, Siddall shows that Adad-nīrārī’s reign marked a period of imperial stability, chiefly through changes to the administration. However, while politically successful, the imperial policy affected the king’s ideological expression, particularly in terms of the description of the campaigns in Adad-nīrārī's inscriptions and his limited use of royal titles.

"Scholars working on the Neo-Assyrian period cannot afford to miss Siddall's fresh assessment of the evidence for Adad-nirari's reign. He offers a re-evaluation of several texts but perhaps more importantly, he proposes a few methodological innovations that shed new light on the history of Assyria in the 9th century." Bill T. Arnold (Asbury Theological Seminary)
E-Book (PDF)

€125.00$151.00
​
Add to Cart
Luis Robert Siddall, Ph. D. (2011), SOAS, the University of London, is a History Master at the Sydney Church of England Grammar School. He has published articles in scholarly journals on Assyrian history, historiography, biblical studies and the Amarna Letters.
List of Tables
Acknowledgements
List of Abbreviations
Introduction
Chapter One: Chronological Issues
Chapter Two: The Extent of the Empire
Chapter Three: Royal Authority and the Dynamics of Power
Chapter Four: Early Neo-Assyrian Royal Ideology (934–810 BCE)
Chapter Five: The Royal Ideology of Adad-nīrārī III
Conclusion
Appendix A: Edition of the Tell Shiekh Hamad Stele
Appendix B: Score of the Calah Slabs
Bibliography

All who are interested in the history of the Ancient Near East and the Neo-Assyrian period in particular.