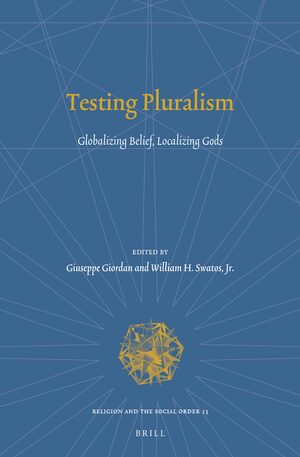 Series:  Religion and the Social Order, Volume: 23
Volume Editors: Giuseppe Giordan and William H. Swatos
This volume of the Religion and the Social Order series examines the phenomenon of the globalization of religions that has particularly characterized the last fifty years. Historically, religions were relatively tightly connected with territoriality. The advent of relatively inexpensive and relatively accessible air transport has made it possible for groups of significant size to move from their original homelands and resettle in new sites. In contrast to predictions associated with secularization theories that dominated the middle of the twentieth century, today we find that the world’s religions continue to provide meaning and value in the lives of their adherents. This volume examines at a global level a variety of such groups and their adjustments.
E-Book (PDF)

€117.00$143.00
​
Add to Cart
Giuseppe Giordan (Ph.D. Pontificial University 2010, summa cum laude) is Senior Lecturer in Sociology at the University of Padua. From 2007 he has served as Secretary of the Sociology of Religion Section of the Italian Sociological Association, and from2009 as General Secretary of the International Society for the Sociology of Religion (ISSR/SASR). With Enzo Pace and Luigi Berzano he edits the Annual Review of the Sociology of Religion, also published by Brill. His latest books in English include Conversion in the Age of Pluralism (2009), as well as the edited volumes Religion, Spirituality, and Everyday Practice (2011, with Bill Swatos) and Mapping Religion and Spirituality in a Postsecular World (2012, with Enzo Pace). His articles have appeared in Implicit Religion, Social Compass and the Review of Religious Research.

William H. Swatos, Jr. served as Executive Officer of the Association for the Sociology of Religion from 1996 to 2012, prior to which he served from 1989 to 1994 as editor of Sociology of Religon, the ASR’s official journal. He has served as editor of the Religion and the Social Order Series since 2005, including editing the volumes On the Road to Being There: Studies in Pilgrimage and Tourism in Late Modernity in 2006 and, with Diana Tumminia, How Prophecy Lives in 2011. He is Executive Officer of the Religious Research Association and a Senior Fellow of the Center for Religious Inquiry Across the Disciplines at Baylor University, serving as editor of the Interdisciplinary Journal of Research on Religion. A doctoral alumnus of the University of Kentucky, he has co-authored, with Kevin Christiano and Peter Kivisto, the text Sociology of Religion: Contemporary Developments, soon to be issued in a third edition. In 2010 he was named Canon Theologian of the Anglican Diocese of Quincy (Illinois).

Contributors include Edward Bailey, Barbara Bertolani, Anthony Blasi, Emanuela Contiero, Robert Dixon, Anat Feldman, Christina Gutiérrez Zúñiga, Barbara Kilbourne, Barbara Loach, Neils Reeh, Stefano Sbalchiero, Renée de la Torre.
This volume will be of interest to both students of the various religious traditions specifically addressed in the case studies as well as those who are interested in global migration and its reciprocal effects upon both migrants and native populations. Sociologists, anthropologists, missiologists will also find insights into both the specific cases presented and the larger processes that lie behind them.