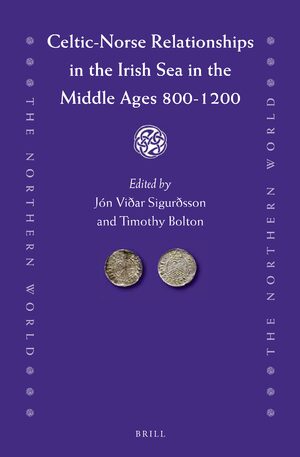 Volume Editors: Jón Viđar Sigurđsson and Timothy Bolton
This volume contains the proceedings of a conference held in Oslo in late 2005, which brought together scholars working in a wide variety of disciplines from Scandinavia, Great Britain and Ireland. The papers here began as those read at the conference, augmented by two written immediately after by attendees, but have been updated in light of the discussions in Oslo and more recent scholarship. They offer historical, archaeological, art-historical, religious-historical and philological views of the interaction and interdependence of Celtic and Norse populations in the Irish Sea region in the period 800 A.D.-1200 A.D.
Contributors are Ian Beuermann, Barbara Crawford, Claire Downham, Fiona Edmonds, Colmán Etchingham, Zanette T. Glørstad, John Hines, Alan Lane, Julie Lund, Jan Erik Rekdal and David Wyatt.

€123.00$151.00
​
Add to Cart
Jón Viðar Sigurðsson is a Professor of History in the Institutt for arkeologi, konservering og historie, University of Oslo. He is the author of a large number of monographs and articles on Medieval Scandinavia including Den vennlige vikingen. Vennskapets makt i Norge og på Island ca. 900-1300 (Oslo, Pax, 2010), and Chieftains and Power in the Icelandic Commonwealth (Transl. Jean Lundskær-Nielsen, Odense 1999).
Timothy Bolton is an independent scholar and an honorary fellow of the School of History, University of Wales, Cardiff. He is the author of a monograph on The Empire of Cnut the Great: Conquest and the Consolidation of Power in Northern Europe in the Early Eleventh Century (Leiden and Boston: Brill, 2009), as well as a number of articles on Anglo-Saxon and Medieval Scandinavian history.
"This volume presents a wide range of approaches and evidence relating to a broad region in the ninth to thirteenth centuries. That this breadth is achieved without straying from the aim to address ‘Celtic-Norse relationships’ is a major strength of the volume. [...] This will be a valuable collection for encouraging interdisciplinary reading amongst students of the Irish Sea, and indeed future students of the Irish Sea Province." Alison Leonard, University of York, in: Northern Scotland, 9 (2018), pp. 73-76.
Preface ... vii
List of Illustrations ... xv
List of Contributors ... xvii

1. Vikings’ Settlements in Ireland Before 1014 ... 1
Clare Downham
2. Names for the Vikings in Irish Annals ... 23
Colmán Etchingham
3. Saints’ Cults and Gaelic-Scandinavian Influence around the Cumberland Coast and North of the Solway Firth ... 39
Fiona Edmonds
4. The Kingdom of Man and the Earldom of Orkney—Some Comparisons ... 65
Barbara E. Crawford
5. No Soil for Saints: Why was There No Native Royal Martyr in Man and the Isles? ... 81
Ian Beuermann
6. Slavery, Power and Cultural Identity in the Irish Sea Region, 1066–1171 ... 97
David Wyatt
7. Pagan Myth and Christian Doctrine ... 109
Jan Erik Rekdal
8. Ceramic and Cultural Change in the Hebrides AD 500–1300 ... 119
Alan Lane
9. Homeland—Strange Land—New Land. Material and Theoretical Aspects of Defining Norse Identity in the Viking Age ... 151
Zanette Tsigaridas Glorstad
10. Viking Weapons in Irish Wetlands ... 171
Julie Lund
11. From *AnleifR to Havelok: The English and the Irish Sea ... 187
John Hines

All interested in the history of Scandinavia and Ireland during the Viking Age from either a historical, archaeological art- or religious-historical, philological or interdisciplinary viewpoint.