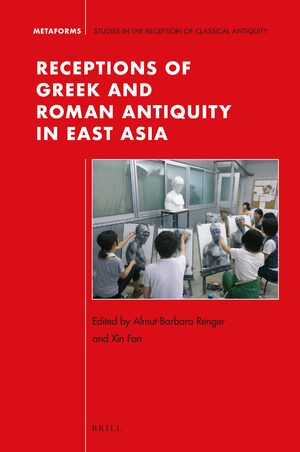 Receptions of Greek and Roman Antiquity in East Asia

Volume Editors: Almut-Barbara Renger and Xin Fan
Receptions of Greek and Roman Antiquity in East Asia is an interdisciplinary, collaborative, and global effort to examine the receptions of the Western Classical tradition in a cross-cultural context. The inclusion of modern East Asia in Classical reception studies not only allows scholars in the field to expand the scope of their scholarly inquiries but will also become a vital step toward transcending the meaning of Greco-Roman tradition into a common legacy for all of human society.
E-Book (PDF)

€189.00$227.00
​
Add to Cart
"This book is a milestone in the development of studies of reception of the Greco-Roman Classical tradition. It consolidates the growing tendency to expand these studies beyond Europe and North America and will both stimulate further research and remain as an indispensable reference work for years to come." Glenn W. Most, Professor of Greek Philology at the Scuola Normale Superiore in Pisa and Visiting Professor at the University of Chicago in the Committee on Social Thought

"Ambitiously conceived and adequately executed, this anthology showcases the result of a multiyear research project on the receptions of Greek and Roman classical culture across East Asia. By taking a multidisciplinary approach, it includes a cross-section of well researched and richly written papers on how the Greek and Roman gods, their myths and legends and the various forms of art and literature inspired by them fascinated Asian artists, architects, poets, writers and scholars over the past five centuries. Meanwhile, the book presents convincing evidence that this cross-cultural dialogue has not followed a unilateral path. Rather, in their transferring to Asia, as the editors and contributors argue, Western classical cultures were not only received by the Asians but they themselves also received a new form of life that has, to some extent, rivaled its original form. It is a valuable reading for Western classicists and specialists in Asia and, indeed, anyone interested in cross-cultural communications between the East and West and beyond." Q. Edward Wang, Professor of History at Rowan University and Peking University

"(...) In this book, the authors have covered a wide range of topics on the spread and reception of Greek and Roman culture in East Asia. This is a highly significant work. To borrow from Edward Said’s “travel theory,” one can argue that Greek and Roman culture in East Asia was a “travel of culture.” Through this process from West to East, Greek and Roman culture kept changing its outlook. From its Classical origins in Europe, it eventually gave birth to the modern world in East Asia." Ge Zhaoguang, Professor in the National Institute for Advanced Humanistic Studies and the Department of History at Fudan University in Shanghai
Scholars and graduate students of Classical Studies in East Asian countries and regions, reception studies worldwide, and anyone concerned with cross-cultural exchanges and knowledge transfers.