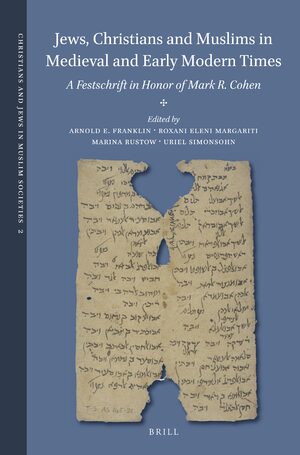 Jews, Christians and Muslims in Medieval and Early Modern Times

A Festschrift in Honor of Mark R. Cohen

Volume Editors: Arnold E. Franklin, Roxani Eleni Margariti, Marina Rustow, and Uriel Simonsohn
This volume brings together articles on the cultural, religious, social and commercial interactions among Jews, Christians and Muslims in the medieval and early modern periods. Written by leading scholars in Jewish studies, Islamic studies, medieval history and social and economic history, the contributions to this volume reflect the profound influence on these fields of the volume’s honoree, Professor Mark R. Cohen.

€157.00$194.00
​
Add to Cart
Arnold E. Franklin, Ph.D. (2001), Princeton University, is associate professor in the History Department at Queens College, City University of New York. His research focuses on medieval Jewish society in the Islamic world. His recent book, This Noble House: Jewish Descendants of King David in the Medieval Islamic East (University of Pennsylvania Press, 2012), is a study of the profound concern with biblical genealogy that developed among Jews in Arabic-speaking lands.

Roxani Eleni Margariti, Ph.D. ( 2002), Princeton University, is associate professor at Emory University, and the author of Aden and the Indian Ocean Trade: 150 Years in the Life of a Medieval Arabian Port (University of North Carolina Press, 2007).

Marina Rustow, Ph.D. (2004), Columbia University, is the Charlotte Bloomberg professor in the Humanities and an associate professor in the History Department at Johns Hopkins University. She is the author of Heresy and the Politics of Community: The Jews of the Fatimid Caliphate (Cornell University Press, 2008), which won the Salo Baron Prize and the Jordan Schnitzer Award, and the co-editor of Jewish Studies at the Crossroads of Anthropology and History: Authority, Diaspora, Tradition (University of Pennsylvania Press, 2011).

Uriel Simonsohn, Ph.D. (2008), Princeton University, is assistant professor in the Department of Middle Eastern Studies at the University of Haifa. He is a historian of early Islamic history. His book, A Common Justice: The Legal Allegiances of Christians and Jews under Early Islam (University of Pennsylvania Press, 2011), explores the social affiliations of non-Muslims in the first few centuries after the Islamic conquest.

'In a period marked by an inflation of proliferating Festschriften, it is a pleasure to read a book of quality articles clearly focused on the research areas of a very worthy scholar. Mark R. Cohen, who taught for forty years at Princeton University, pursued innovative investigations of Jewish-Islamic relations in the realms of both economics and politics in light of findings from the Cairo Geniza, a Jewish repository of hundreds of thousands of medieval literary and documentary texts'.

The Bibliography of Mark R. Cohen

Pilgrimage and Charity in the Geniza Society
Miriam Frenkel

“What Sort of Sermon is This?”: Leadership, Resistance and Gender in a Communal Conflict
Oded Zinger

Are Geonic Responsa a Reliable Source for the Study of Jewish Conversion to Islam? A Comparative Analysis of Legal Sources
Uriel Simonsohn

Jews among the Grandees of Ottoman Egypt
Jane Hathaway

Remembrance and Oblivion of Religious Persecutions: On Sanctifying the Name of God (Qiddush ha-Shem) in Christian and Islamic Countries during the Middle Ages
Menahem Ben-Sasson

More than Words on a Page: Letters as Substitutes for an Absent Writer
Arnold E. Franklin

The Diplomatics of Leadership: Administrative Documents in Hebrew Script from the Geniza
Marina Rustow

A Panegyric Qaṣīda by Judah Halevi, Its Antecedent by Solomon Ibn Gabirol, and Its Afterlife
Raymond P. Scheindlin

Scholars and students interested in the history of interreligious encounters in pre-modern times will find this volume of indispensible value. The book will especially appeal to those who seek to delve into the literary, legal, and social manifestations of such encounters.