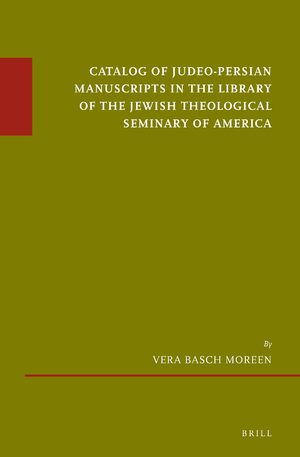 The intellectual legacy of the ancient community of Iranian Jews rests in several large but neglected Judeo-Persian manuscript collections. The largest in the West, and the third largest collection in the world (198 manuscripts), belongs to the Library of the Jewish Theological Seminary of America, New York. Primarily a work of reference, this Catalog informs scholars in the fields of Judaica and Iranica about the range of subjects (history, poetry, medicine, philology, etc.) that engaged Iranian Jews between the fifteenth and nineteenth centuries. It reflects the intellectual parameters of Iranian Jewry by describing the extent to which they were acquainted with classical Jewish texts while they were deeply enmeshed in the literary and artistic sensibilities of their Iranian environment.
E-Book (PDF)

All scholars, students, and laymen interested in Jewish, Muslim, and Jews in the Muslim world (history, literature and general culture).