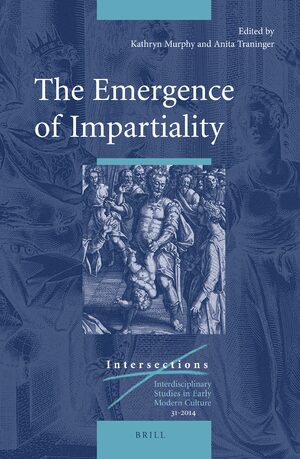 The Emergence of Impartiality

Editors: Kathryn Murphy and Anita Traninger
This volume exposes the contested history of a virtue so central to modern disciplines and public discourse that it can seem universal. The essays gathered here, however, demonstrate the emergence of impartiality. From the early seventeenth century, the new epithet ‘impartial’ appears prominently in a wide range of publications. Contributors trace impartiality in various fields: from news publications and polemical pamphlets to moral philosophy and historical dictionaries, from poetry and drama to natural history, in a broad European context and against the backdrop of religious and civil conflicts. Cumulatively, the volume suggests that the emergence of impartiality is implicated in the period’s epochal shifts in epistemology and science, religious and political discourse, print culture, and scholarship.

€173.00$213.00
​
Add to Cart
Anita Traninger, Ph.D. (1998), is Einstein Junior Fellow at the Department of Romance Languages and Literatures at Freie Universität Berlin. Her areas of research include the history of rhetoric and dialectics, literature and discourses of knowledge in early modern Europe, and the fact/fiction divide.

Kathryn Murphy, D.Phil. (2009), is Fellow and Tutor in English Literature at Oriel College, Oxford. Her research focuses on early modern English prose, discourses of knowledge, and the reception of ancient philosophy.

Taking Sides and the Prehistory of Impartiality
ANITA TRANINGER

Reasons for Holding Back in Two Essays of Montaigne
RICHARD SCHOLAR

3. LITERATURE, POLITICS, AND THE LAW

‘Partialitie in a Iudge, is a Turpitude’: Partial Judges and Impartial Revengers in Early Modern English Drama
DEREK DUNNE

‘Out of Books and Out of Themselves’: Invigorating Impartiality in Early Modern England
NATHAN STOGDILL
The Language of Impartiality and Party-Political Discourse in England, 1680–1745
CHRISTINE GERRARD

Objectivity, Impartiality, and Hermeneutics in the Leibnizian-Wolffian Debates between 1720 and 1750
HANNS-PETER NEUMANN

5. IMPARTIALITY AND THE HISTORY OF SCHOLARSHIP

6. A VIEW FROM NOWHERE: IMPARTIALITY AND MORAL PHILOSOPHY

Morals Before Objectivity: On the Relation of Moral Cognition and Moral Philosophy in Hume
TAMÁS DEMETER

Between Impartiality and Parrhesia: Adam Smith’s Figure of the Impartial Spectator
BASTIAN RONGE

7. IMPARTIALITY AND THE ART OF OBSERVATION

Impartiality in the Matrix of Taxonomy: Carl von Linné and Folklore
BERND ROLING

Truth Rather Than Elegance: A Paradoxical Case of Impartiality in Alexander Cozens’s Principles of Beauty (1778)
ANJA ZIMMERMANN

Those interested in the history of knowledge, the history of print culture and the mass media, aesthetics, religion, politics, literature, moral philosophy, history, natural history and the sciences.