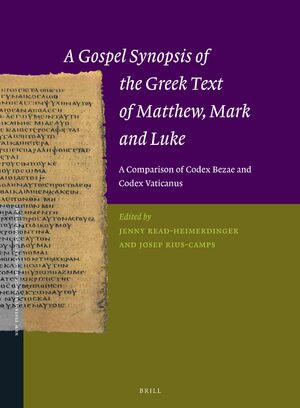 A Gospel Synopsis of the Greek Text of Matthew, Mark and Luke

A Comparison of Codex Bezae and Codex Vaticanus

Editors: Jenny Read-Heimerdinger and Josep Rius-Camps
The aim of this new Gospel Synopsis is to enhance the study of the Synoptic Gospels and provide insights into the synoptic problem through a clear presentation of the Greek text. Jenny Read-Heimerdinger and Josep Rius-Camps set out the Gospels of Matthew, Mark and Luke in turn, comparing each line by line with the other two.
A further innovative feature is that the text is presented according to two important Gospel manuscripts, Codex Bezae and Codex Vaticanus, rather than the usual eclectic edition of the Greek New Testament. Thus, not only are the differences between the Gospels clearly visible but also, the complexity of their relationship is more easily identified through the comparison of two divergent manuscripts representative of distinct traditions.

€208.00$257.00
​
Add to Cart
Jenny Read-Heimerdinger, PhD (1994), LicDD (2010), University of Wales, works as a postgraduate supervisor at that University. She has published linguistic and textual research on the Gospels and Acts, focusing on issues related to Second Temple Judaism.

Josep Rius-Camps is a priest of the Diocese of Barcelona and is Emeritus Professor at the Facultat de Teologia de Catalunya in Spain. He has published extensively, especially on the distinctive authorial perspectives of the text of Codex Bezae.

' a splendid research tool, presenting fuller insights into what considering multiple gospel manuscripts synoptically might reveal.[...] Read-Heimerdinger and Rius-Camps have not only produced a key reference work, they have highlighted what might be possible in the deacdes to come.'
Paul Foster, University of Edinburgh, The Expository Times 128 (5) February 2017

The present synopsis is a welcome and most valuable addition to the tools necessary for synoptic studies in general and manuscript studies in particular. For the study of the Synoptic Gospels in Bezae and Vaticanus specifically, the synopsis provides an almost indispensable point of departure. The ease with which parallel passages in these two manuscripts can be compared—either within a single manuscript or across both—can hardly be surpassed, even with digital tools.'
Ronald H. van der Bergh, University of Pretoria, RBL 10 2016

By offering a text that was used by an early Church community, A Gospel Synopsis attentively addresses the ongoing methodological discussions surrounding the preeminence of reconstructed eclectic texts of the Greek New Testament. The layout and clarity of the work is exceptional; and along with its careful transcriptions [of these seminal ancient manuscripts], this volume will become an invaluable tool for New Testament studies.
Kent D. Clarke, Trinity Western University, Canada

The completeness and accuracy of this Gospel Synopsis is to be applauded. At one and the same time, it intensifies the complexity of the ‘synoptic problem’ while also greatly facilitating the investigation of it. It serves both synoptic and text-critical studies very well.
Armand Puig i Tarrech, Facultad de Teologia de Catalunya (Barcelona)

We recommend this book for a fresh display of the Greek synoptic gospels, for giving readers an opportunity to examine the distinctiveness of these two early codices and for its open invitation to revisit some attempted solutions to the synoptic problem that were based on other and differing synopsis texts.
J.K. Elliott, Novum Testamentum 57 (2015)

Anyone interested in the Synoptic problem, including the debate about Q, as well as textual critics concerned with the question of harmonisation in the Gospels