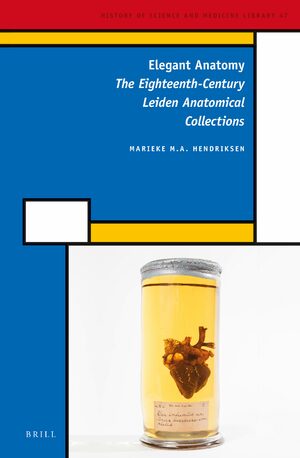 Author: Marieke M.A. Hendriksen
In Elegant Anatomy Marieke Hendriksen offers an account of the material culture of the eighteenth-century Leiden anatomical collections, which have not been studied in detail before. The author introduces the novel analytical concept of aesthesis, as these historical medical collections may seem strange, and undeniably have a morbid aesthetic, yet are neither curiosities nor art.

As this book deals with issues related to the keeping and displaying of historical human remains, it is highly relevant for material culture and museum studies, cultural history, the history of scientific collections and the history of medicine alike. Unlike existing literature on historical anatomical collections, this book takes the objects in the collections as its starting point, instead of the people that created them.

€116.00$152.00
​
Add to Cart
Marieke Hendriksen, Ph.D. (2012), Leiden University, is postdoctoral researcher in the History of Science and Medicine at the University of Groningen. She has published both scholarly and popular work on the material culture of historical scientific collections.
'They [the images] form a provocative source that, along with the case studies, can be put to use by scholars interested in the history of science, scientific instruments, material culture, museums and the history of science in public. It joins a growing literature that reveals a desire to bring such studies together for their mutual benefit.'
Rebekah Higgitt in: The British Journal for the History of Science, Volume 48, Issue 04, December 2015, pp. 697-699.
DOI: 10.1017/S0007087415000771, Published online: 02 December 2015.

In Elegant Anatomy Marieke Hendriksen sees the mixture of wonder and disgust that seems to be at work in Cox’s sketches as derived from an eighteenth-century “epistemic culture” distinct from our own. Her first chapter is on trying to create a specimen (of a sheep’s heart) by imitating eighteenthcentury injection methods. The experiment served to instruct her and her friends about the difficulties of getting any usable results without learning from a master. But while she cannot duplicate their techniques, she does get at their aims by invoking a term occasionally used in the period, “aesthesis.” [...] For Hendriksen, aesthesis has five interlinked characteristics: what can be known through sensory perception; scrutiny and manipulation of the elegance of the material world; dealing with disgust; the tactile processes of commodification, domestication, and objectification; and tacit knowledge. The commodification of bodies in the period is important; but for people like the anatomist Albinus, she sees the main goal as knowledge of the “perfection of nature.” She is especially good on the “aesthesis” evident in covering the limbs of babies in bottles with lace sleeves and related phenomena; and there is an excellent chapter here on the babies in bottles sent from Africa and Asia (another version of it appears in The Fate of Anatomical Collections). In a nonpositivistic account of the period one will struggle to find information about new anatomical findings, which the actors thought were important too. But her work on the cultural history of the anatomical aethesis of the eighteenth century makes excellent use of information about the intentions and practices of anatomical preparators, along with a close study of some of the items themselves. It is good to try to get past “aesthetics.”
Harold J. Cook, in: Isis, Volume 107, Number 1, March 2016, pp. 149-152.

All interested in the material culture of Dutch eighteenth-century science, and anyone concerned with the history of anatomical collections and the issues raised by keeping and displaying historic human remains.