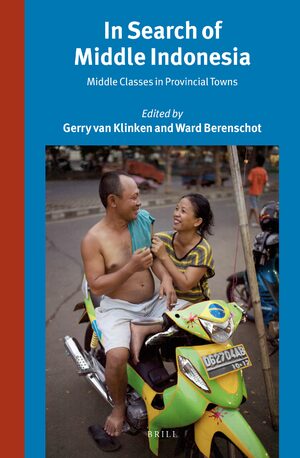 In Search of Middle Indonesia

Series:  Verhandelingen van het Koninklijk Instituut voor Taal-, Land- en Volkenkunde, Volume: 292/4 and  Power and Place in Southeast Asia, Volume: 292/4
Editors: Gerry van Klinken and Ward Berenschot
The post-1998 surge in local politics has moved the provincial town back to centre stage. This book examines the Indonesian middle class (now 43%!) up close in the place where its members are most at home: the town. Middle Indonesia generates national political forces, yet it is neither particularly rich nor geographically central. This is an overwhelmingly lower middle class, a conservative petty bourgeoisie barely out of poverty and tied to the state. Middle Indonesia rather resists than welcomes globalized, open markets. Politically, it enjoys democracy but uses its political skills and clientelistic networks to make the system work to its advantage, which is not necessarily that of either the national elites or the poor.
Contributors include Ward Berenschot, Joseph Errington, Noorhaidi Hasan, Gerry van Klinken, Cornelis Lay, Wenty Marina Minza, Jan Newberry, Amalinda Savirani, Sylvia Tidey, Nicolaas Warouw, and Ben White. Photographs by S. Chris Brown.
E-Book (PDF)

€103.00$134.00
Hardback
Add to Cart
About MyBook
Gerry van Klinken, PhD (1996), Griffith University, Australia, senior researcher at KITLV and professor of Southeast Asian history at University of Amsterdam, wrote Communal violence and democratization in Indonesia (2007). He coordinated the research programme for this book.
Ward Berenschot, PhD (cum laude, 2009) in political science at University of Amsterdam, is the author of Riot politics (2011). His research focuses on local democracy, political clientelism and identity politics. He is a post-doctoral researcher at KITLV, Leiden.
'Many of the chapters, then, are written by Indonesian scholars, and herein lies the value of this collection: it provides a view of contemporary society and democracy as it is seen by Indonesian people.'
Emma Baulch in Pacific Affairs 89.1 (2016), 230-232.
About the Authors
Preface
List of Illustrations

This volume should interest upper level university students focusing on middle classes in the global South, particularly if they are doing urban studies, anthropology/ sociology, and human geography.