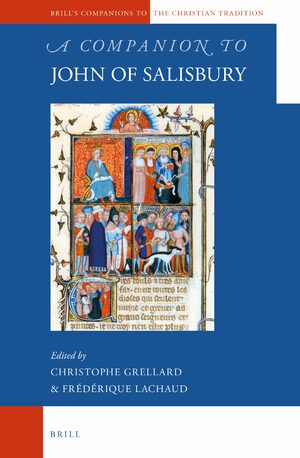 A Companion to John of Salisbury

Editors: Christoph Grellard and Frédérique Lachaud
The Companion to John of Salisbury is the first collective study of this major figure in the intellectual and political life of 12th-century Europe to appear for thirty years. Based on the latest research, thirteen contributions by leading experts in the field provide an overview of John of Salisbury’s place in the political debates that marked the reign of Henry II in England as well as of his place in the history of the Church. They also offer a detailed introduction to his philosophical works ( Metalogicon, Entheticus), his political thought ( Policraticus) and his writing of history ( Historia pontificalis).

€180.00$234.00
​
Add to Cart
Christoph Grellard is Assistant Professor at the University of Paris I (Panthéon-Sorbonne). He specialises in the history of medieval philosophy. His publications include Jean de Salisbury et la Renaissance médiévale du scepticisme (2013).

Frédérique Lachaud is Professor of Medieval History at the University of Lorraine. She specialises in the history of English political culture from the twelfth to the fourteenth century. Her publications include L’Éthique du pouvoir au Moyen Âge. L’office dans la culture politique (Angleterre, vers 1150-vers 1330) (2010).

“[This book’s] purpose, to provide a vade mecum to lead readers into critical encounters with the paradoxes of the life, outlook and writings of the enigmatic John of Salisbury, is fully realised.”
Anne J. Duggan, King's College London. In: Journal of Ecclesiastical History, Vol. 67, No. 3 (July 2016), pp. 637-638.

Part Two: John of Salisbury as a Writer

John of Salisbury as a Writer
Ronald E. Pepin

John of Salisbury and the Writing of History
Clare Monagle

Part Three: John of Salisbury and the Intellectual World of the 12th Century

John of Salisbury on Science and Knowledge
David Bloch

Part Four: John of Salisbury and his Readers

Filiation and Context: The Medieval Afterlife of the Policraticus
Frédérique Lachaud

Anyone interested in the intellectual and political history of 12th-century England and in the wider history of medieval thought.