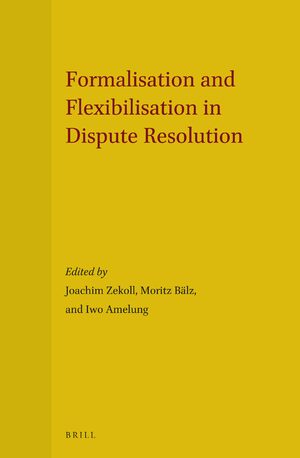 Formalisation and Flexibilisation in Dispute Resolution

Editors: Joachim Zekoll, Moritz Bälz, and Iwo Amelung
Formal law versus informal justice – these are two frequently invoked labels to highlight the distinction between court-based and “alternative” dispute resolution (ADR). Indeed, it appears to be all but a truism to assume that ADR has developed as a more flexible and creative alternative to rigid and formalised judicial proceedings. In Formalisation and Flexibilisation in Dispute Resolution scholars from four continents examine both historical and recent developments that cast doubt on the validity of these widespread assumptions. They not only explore trends towards an increased formalisation of ADR procedures but also address the tendencies of state civil justice systems to adopt flexible and informal tools for the resolution of disputes in the courts.

Editors Joachim Zekoll, Moritz Bälz and Iwo Amelung have divided the book into three Parts. Part One seeks to develop the general theme of formalisation from several angles, including a socio-legal perspective, the public-private divide, the regulatory challenges and potential tensions with the rule of law. The emphasis of Part Two is on the historical emergence of formal and informal dispute resolution instruments in several legal and cultural contexts. Historical roots, be they genuine or construed, also play a role in the other two parts of the book, but in this part, they take centre stage. Finally, Part Three features chapters which address and elaborate on specific applications such as ADR as means of consumer dispute resolution and arbitration in transnational investment disputes. While the contributions to the first two parts of this volume already raise normative questions in some respects, this final part evaluates and passes judgement on the potential merits and deficits of ADR in a variety of specific settings.

€171.00$213.00
​
Add to Cart
Joachim Zekoll holds the chair of Private Law, Civil Procedure, and Comparative Law at Goethe University in Frankfurt am Main, Germany since 2001. From 1992 until 2001, he was on the faculty of the Tulane University School of Law (New Orleans), serving as the John Minor Wisdom Professor of Law from 1999 until 2001. From 2003 to 2007, concurrently with his appointment in Frankfurt, he was the A.D. Freeman Professor of Law at Tulane. Joachim Zekoll is a member of the American Law Institute and the International Academy of Comparative Law. He has published widely in the fields of conflict of laws and procedure and comparative law.

Moritz Bälz holds the Chair of Japanese Law and its Cultural Foundations at Goethe University in Frankfurt am Main, Germany since 2008. Prior to joining the faculty of law and the Interdisciplinary Centre for East Asian Studies (IZO) at Goethe University he has been working with international law firm Freshfields Bruckhaus Deringer in New York and Frankfurt for several years. His research focuses on business law from a comparative perspective as well as on issues of dispute resolution in Japan. He serves as co-editor of Zeitschrift für Japanisches Recht/Journal of Japanese Law.

Iwo Amelung is Professor of Chinese Studies at Goethe Unviversity, Frankfurt am Main since 2007. Before joining the Interdisciplinary Centre for East Asian Studies (IZO) and the Institute for East Asian Philologies he has worked as managing director at the European Center of Chinese Studies at Peking University in Beijing. His main research interests are the social history of late Imperial China as well as processes of the circualation and appropriation of knowledge between China and the West during the 19th and 20th centuries.

PART I: The Theme in General

CHAPTER 2: THE PRIVATE IN PUBLIC, THE PUBLIC IN PRIVATE: THE BLURRING BOUNDARY BETWEEN PUBLIC AND PRIVATE DISPUTE RESOLUTION
DEBORAH R. HENSLER

CHAPTER 4: MEDIATION AND THE RULE OF LAW: THE CHINESE LANDSCAPE
HUALING FU

CHAPTER 6: JUDICIAL DISPUTE RESOLUTION AND ITS MANY ALTERNATIVES: THE NORDIC EXPERIENCE
PIA LETTO-VANAMO

CHAPTER 7: “EXPLAINING” AND “MEDIATING” IS MORE IMPORTANT THAN PENALTIES:
A COMPREHENSIVE EXPLANATION OF THE RESOLUTION OF MINOR CASES AT COUNTY LEVEL IN LATE-IMPERIAL CHINA (1368-1911)
JIANG YU

CHAPTER 8: THE DIVERSIFICATION AND FORMALISATION OF ADR IN JAPAN: THE EFFECT OF ENACTING THE ACT ON THE PROMOTION OF THE USE OF ALTERNATIVE DISPUTE RESOLUTION
KOTA FUKUI

CHAPTER 10: INFORMALISM AND FORMALISM IN THE HISTORY OF ADR IN THE UNITED STATES AND AN EXPLORATION OF THE SOURCES, CHARACTER, AND IMPLICATIONS OF FORMALISM IN A COURT-SPONSORED ADR PROGRAMME
WAYNE BRAZIL

INDEX
All those interested in "alternative" disputed resolution (ADR).