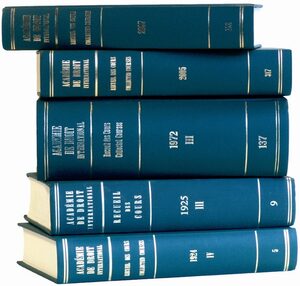 Series:  Collected Courses of The Hague Academy of International Law - Recueil des cours, Volume: 369
Author: Académie de Droit International de la Ha
Transnational Commercial Law and Conflict of Laws: Institutional Co-operation and Substantive Complementarity by Herbert Kronke
This Hague lecture takes issue with suggestions that transnational commercial law and its wide variety of instruments, including soft-law instruments, might be an alternative to classic administration of trans-border transactions and disputes by way of conflict-of-laws rules. Rather, the latter and the former complement each other. Moreover, the intergovernmental Organizations charged with developing and modernizing conflict-of-laws rules and substantive rules are co-operating with a view to enhancing the tools at the disposal of businesses and courts. The lecture identifies and explains current examples in the area of financial services, secured transactions, and contract law.

The Human Rights of Undocumented Migrants by Loretta Ortiz Ahlf
International human rights law has offered humankind various international instruments that guarantee every person the effective protection of his or her human rights. However, these rights have not been effectively guaranteed by States in the case of undocumented migrants because these people do not have legal status in the destination country. The first section of this work defines the concept of undocumented worker in order to differentiate him or her from a refugee, an asylee or a displaced person. Universal and regional human rights treaties, as well as international jurisprudence, are then analysed, centring attention on the human rights that are violated most frequently against undocumented workers, such as the right to non-discrimination, the right to residence and free movement, the right of access to justice, labour rights the right to freedom and the right to family reunification, among others.

Pan-Africanism and International Law by Abdulqawi A. Yusuf
Pan-Africanism offers a unique vantage point to study Africa’s encounters with international law : first, as a continent whose political entities were excluded from the scope of application of the Eurocentric version of international law that was applied among the self-styled club of “civilized nations” ; second, through the emergence of African States as subjects of international law willing to contribute to the reform and further development of the law as a universal interstate normative system; and third, as members of the OAU and the AU acting collectively to generate innovative principles and rules, which, though applicable only in the context of intra-African relations, either go beyond those existing at the universal level or complement them by broadening their scope. This study examines those encounters through the various stages in the evolution of Pan-Africanism from a diaspora-based movement, engaged in the struggle for the emancipation of the peoples of the continent, to groupings of independent States and intergovernmental organizations which continue to promote African unity and influence the development of international law to make it more reflective of diverse legal traditions and values.

Efficiency in Private International Law by Toshiyuki Kono
Private international law (PIL) problems have existed for centuries when people from various territories and religious and social groups engaged in mutual contacts. Some of the core issues of this discipline have been critically reviewed during the so-called conflicts revolution which took place during the twentieth century in the American academic literature and court practice. However it seems that not much discussion on methodologies of PIL has developed since then. This lecture, inspired by the Law and Economics approach, introduces the concept of efficiency into PIL, aiming to show new dimensions of traditionally important issues. First, this author challenges the traditional understanding that uniform law is always more desirable than PIL, and raises questions on the rationale and possibility of the unification of PIL. Second, territoriality has been understood to exclude PIL. This lecture clarifies why such understanding does not hold in the twenty-first century especially in the field of intellectual property, and argues that a one-sizefits-all model would not be appropriate in the context of cross-border insolvency

$199.00
Hardback
Add to Cart
Transnational Commercial Law and Conflict of Laws: Institutional Co-operation and Substantive Complementarity by H. Kronke: i. Introduction ii. History: distrust of conflict of laws as a cause for promoting transnational commercial law — the carriage of goods (and passengers) by air 1. The state of affairs prior to the advent of transnational commercial law 2. A new era: the warsaw Convention of 1929 iii. Two grand masters’ charges iv. Transnational commercial law defined v. Current examples of complementarity and co-operation 1. The state of things: no aut-aut 2. First example: intermediated securities (a) The problem ii(i) History: securities holding at arm’s length i(ii) dematerialization, immobilization (iii) Conceptual analysis (iv) problem areas a. General. b. specifically: the conflict-of-laws problem (b) The Hague securities Convention (c) The Geneva securities Convention (d) new players at the institutional level: European union and European Central bank . (e) lessons from the past 3. second example: secured transactions 4. Third example: contract law vi. Conclusions The Human Rights of Undocumented Migrants by L. Ortiz Ahlf: Excerpt of table of contents: Chapter I. Overview 1. Introduction 2. Distinction between refugees, asylees, displaced persons and undocumented 3. Minimum standard for foreigners and diplomatic protection Chapter II. Human rights instruments applicable for undocumented migrants 1. Universal Declaration of Human Rights 2. International Covenant on Civil and Political Rights 3. International Covenant on Economic, Social and Cultural Rights 4. European Convention for the Protection of Human Rights and Fundamental Freedoms 5. American Convention on Human Rights 6. African Charter on Human and Peoples’ Rights 7. International Convention on the Elimination of All Forms of Racial 8. Convention on the Elimination of All Forms of Discrimination against Women and Its Optional Protocol. 9. Convention on the Rights of the Child 10. Convention on the Protection of the Rights of All Migrant Workers and Members of Their Families Chapter III. The human rights of undocumented migrants 1. The right to equality and non-discrimination 2. The right to freedom. 3. The right to liberty of movement and residence 4. The right of access to justice 5. The right of effective access to consular assistance 6. Labour rights. 7. The right to freedom from torture and cruel, inhuman or degrading treatment 8. The right to family reunification Chapter IV. The most relevant opinions and judgments 1. The human rights of undocumented aliens in the International Court of Justice 2. Undocumented aliens and the European Court of Human Rights 3. Human rights of undocumented aliens in the Inter-American Court of Human Rights Conclusions Bibliography Pan-Africanism and International Law by A. A. Yusuf: Introduction Chapter I. The origins and evolution of Pan-Africanism A. The origins of Pan-Africanism in the diaspora B. Pan-Africanism in independent Africa: fighting for total decolonization. C. Pan-Africanism under the African Union : fostering democratization and development Chapter II. Pan-Africanism and the jus publicum Europaeum A. International law and the jus publicum Europaeum B. The jus publicum Europaeum and the colonization of Africa C. Early signs of collision between Pan-Africanism and the jus publicum Europaeum Chapter III. Pan-Africanism and the emergence of African States as subjects of international law A. Concerted action to effect change in international law B. Rejection or resistance to certain rules and principles C. Ambivalence and eclecticism towards other rules D. A desire to reform old rules and influence the emergence of new rules 1. The right of peoples to self-determination 2. The legality of assistance to liberation movements and the use of armed force in colonial situations 3. The succession of States to treaties 4. The formulation of the concept of an Exclusive Economic Zone in the law of the sea Chapter IV. The institutional and normative evolution of Pan-Africanism: from the Organization of African Unity to the African Union A. Rekindling the African peoples’ aspirations for stronger unity and solidarity B. Eliminating the scourge of internal conflicts C. Protecting human and peoples’ rights and promoting good governance and the rule of D. Building partnerships between Governments and civil society Chapter V. Pan-Africanism and the African public law: fostering innovative rules and A. The innovative principles of the AU Constitutive Act: some illustrative examples 1. The right of the Union to intervene in a Member State 2. Prohibition of unconstitutional changes of government 3. Respect for democratic principles and good governance B. Other innovative binding instruments: the Kampala Convention C. Introducing collective rights into positive law : the right to development Chapter VI. The African public law and international law: broadening the scope of application of international rules A. The specificities of the African Convention on Refugees B. The added value of the African Charter on the Rights and Welfare of the Child C. The supplementary character of the African Protocol on the Rights of Women D. Broadening the scope of environmental protection: the Bamako Convention. Chapter VII. Final observations Bibliography Efficiency in Private International Law by T. Kono: Excerpt of table of contents: chapter i. introduction chapter ii. conflicts revolution through the lens of efficiency 2.1. traditional approaches 2.2. the choice of law revolution 2.3. the second restatement 2.4. Economic analysis of conflict of laws approaches chapter iii. uniform law and private international law — is uniform law more desirable than private international law? 3.1. critical analysis of the conventional arguments 3.2. costs and benefits analysis 3.3. Empirical analysis 3.4. conclusion chapter iv. uniform private international law 4.1. introduction 4.2. incentive analysis on the unification of private international law — focusing on the maintenance phase 4.3. conditions for harmonization and unification 4.4. analysis chapter v. unification of intellectual property law 5.1. intellectual property across the borders 5.2. a rocky road towards international harmonization of IP 5.3. territorial rights in the global market 5.4. unification of international IP law: cost and benefit analysis 5.5. unification of private international law of IP chapter vi. cross-border insolvency and private international law 6.1. three approaches to cross-border insolvency 6.2. incentive analysis 6.3. analysis 6.4. conclusions chapter vii. concluding remarks Bibliography