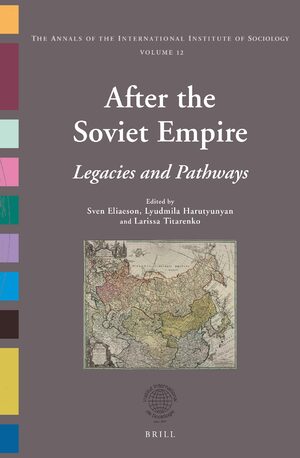 After the Soviet Empire

Series:  Annals of the International Institute of Sociology, Volume: 12
Editors: Sven Eliaeson, Lyudmila Harutyunyan, and Larissa Titarenko
The break-up of the Soviet Union is a key event of the twentieth century. The 39th IIS congress in Yerevan 2009 focused on causes and consequences of this event and on shifts in the world order that followed in its wake. This volume is an effort to chart these developments in empirical and conceptual terms. It has a focus on the lands of the former Soviet Union but also explores pathways and contexts in the Second World at large.
The Soviet Union was a full scale experiment in creating an alternative modernity. The implosion of this union gave rise to new states in search of national identity. At a time when some observers heralded the end of history, there was a rediscovery of historical legacies and a search for new paths of development across the former Second World.
In some parts of this world long-repressed legacies were rediscovered. They were sometimes, as in the case of countries in East Central Europe, built around memories of parliamentary democracy and its replacement by authoritarian rule during the interwar period. Some legacies referred to efforts at establishing statehood in the wake of the First World War, others to national upheavals in the nineteenth century and earlier.
In Central Asia and many parts of the Caucasus the cultural heritage of Islam in its different varieties gave rise to new markers of identity but also to violent contestations. In South Caucasus, Georgia, Armenia and Azerbaijan have embarked upon distinctly different, but invariably contingent, paths of development. Analogously core components of the old union have gone through tumultuous, but until the last year and a half largely bloodless, transformations. The crystallization of divergent paths of development in the two largest republics of that union, i.e. Russia and Ukraine, has ushered in divergent national imaginations but also in series of bloody confrontations.

€143.00$190.00
​
Add to Cart
Sven Eliaeson is Senior Research Fellow at the Uppsala Centre for Russian and Eurasian Studies, Uppsala University. He is a recurrent Visiting Professor at the Centre for Social Studies of the the Graduate School for Social Research (GSSR), Institute of Philosophy and Sociology, Polish Academy of Sciences, Warsaw. He has written widely in the fields of intellectual history, social theory and Max Weber-studies, including the monograph Max Weber’s Methodologies (Cambridge: Polity Press, 2002). He has also edited several volumes on Eastern Europe.

Lyudmila Harutyunyan is Professor of Sociology at Yerevan State University. She has written extensively on social rights and social protection. She has been a member of the European Committee of Social Rights and a consultant to UNDP, UNHCR and UNESCO. She is the author of more than 100 scholarly publications most of which deal with developments in the former Soviet Union. She has played an important role as a public intellectual in Armenia and Russia. In 1989 she was elected to the Congress of People’s Deputies of the USSR.

Larissa G. Titarenko is Professor of Sociology at the Belarusian State University, Minsk. She has published more than 300 articles in eight languages as well as eight monographs and several edited volumes. Her research interests include transformations of post-communist societies, studies of value orientations and the sociology of culture, youth and gender. Among her most recent publication is Dynamics of Value-norm Systems and Life Chances: Experiences of Post-soviet transformations in the Borderland (Vilnius: European Humanitarian University Press, 2014 (in Russian, co-author)).

Keynote address: The International Institute of Sociology and the Sociology of Empires, Civilizations, and Modernities, Björn Wittrock

Introduction: Challenges of the Disappearance of the “Second World”, Sven Eliaeson, Lyudmila Harutyunyan and Larissa Titarenko

PART I. UTILITY OF THE CLASSICS

The Significance of Myrdal for Post-1989 Transformations: His Apocryphal Letters
Sven Eliaeson

Pre- and Post-Revolutionary Situations. Legitimation of Authority and of Social Change in the Perspective of Classical Sociological Theory: The Cases of Russia and France
Christopher Schlembach

Heidegger within the Boundaries of Mere Reason: “Nihilism” as a Contemporary Critical Narrative?
Jon Wittrock

To Build a Nation: Alva Myrdal and the Role of Family Politics in the Transformation of Sweden in the 1930s
Hedvig Ekerwald


PART II. RETHINKING THE LEGACY OF THE SECOND WORLD

Eastern Europe as a Laboratory for Social Sciences
Nikolai Genov


PART III. THE CAUCASUS: ARMENIA AS A CASE STUDY OF THE IMPLOSION OF THE SOVIET EMPIRE

After the Empire: The Migration in the Post-Soviet Space
Lyudmila Harutyunyan & Maria Zaslavskaya

Symbolic Geography: Geography as a Symbol in the Post-Soviet South Caucasus
Hayk Demoyan

Playing Democracy: Some Peculiarities of Political Mentality and Behaviour in the Post-Communist Countries
Arthur Atanesyan

Globalization and Neo-Liberalism: Their Opponents and Their Application to Armenia
Levon Chorbajian

The Past as Present: Foreign Relations and Russia’s Politics of History
Igor Torbakov