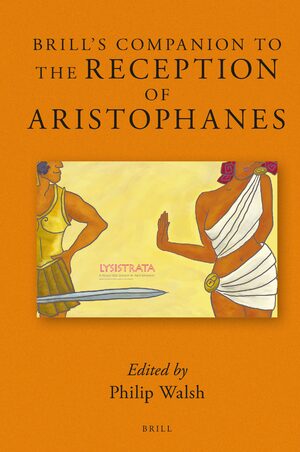 Brill’s Companion to the Reception of Aristophanes

Series:  Brill's Companions to Classical Reception, Volume: 8
Editor: Philip Walsh
Brill’s Companion to the Reception of Aristophanes provides a substantive account of the reception of Aristophanes (c. 446-386 BC) from Antiquity to the present. Aristophanes was the renowned master of Old Attic Comedy, a dramatic genre defined by its topical satire, high poetry, frank speech, and obscenity. Since their initial production in classical Athens, his comedies have fascinated, inspired, and repelled critics, readers, translators, and performers. The book includes seventeen chapters that explore the ways in which the plays of Aristophanes have been understood, appropriated, adapted, translated, taught, and staged. Careful attention has been given to critical moments of reception across temporal, linguistic, cultural, and national boundaries.
E-Book (PDF)

$25.00
​
Add to Cart
About MyBook
Philip Walsh received his Ph.D. in Comparative Literature from Brown University in 2008. He is an assistant professor of English and instructor of Latin and Greek at Washington College. His essay, “A Study in Reception: The British Debates over Aristophanes’ Politics and Influence,” appeared in the first issue of Classical Receptions Journal (Oxford, 2009).

Contributors are Gregory Baker, Cécile Dudouyt, John Given, Matthew J. Kinservik, Stavroula Kiritsi, David Konstan, Mike Lippman, C.W. Marshall, Alexandre G. Mitchell, Mark Payne, Charles Platter, James Robson, Ralph Rosen, Niall W. Slater, Gonda Van Steen, Philip Walsh, Rosie Wyles, and Donna Zuckerberg.
"Consistently thoughtful and frequently quite useful, Philip Walsh’s edited volume on the reception of Aristophanes, part of Brill’s Companions to Classical Reception series, is a model of the form. (...) this book should be a touchstone for future work on Aristophanes in the longue durée. (...)
This is a handsomely produced volume, enhanced by the colorful inclusion of nearly forty recent Lysistrata posters compiled by Mitchell, one of which also graces the cover. (...) Walsh’s useful and engaging volume on the reception of Aristophanes is a testament to the maturity of the approach." A. C. Duncan, Bryn Mawr Classical Review 2017.03.35
Contents