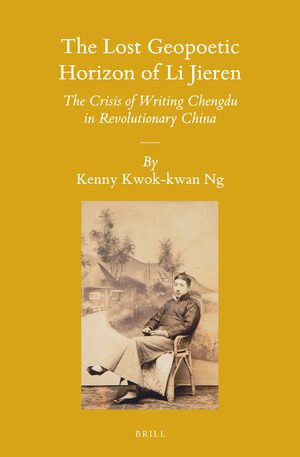 The Crisis of Writing Chengdu in Revolutionary China

$174.00
​
Add to Cart
Kenny Kwok-kwan Ng, Ph.D. (2004), Harvard University, is Assistant Professor of the Open University of Hong Kong. He has published English and Chinese articles on Chinese literature and cinema in the U.S., Europe, Hong Kong, Taiwan, and Mainland China.
“In The Lost Geopoetic Horizon of Li Jieren: The Crisis of Writing Chengdu in Revolutionary China, Kenny K. Ng offers much-needed insights into the regional culture of Chengdu, capital of Sichuan, and the less well-known but very creative literary writer, Li Jieren (1891-1962). […] Ng successfully articulates the connections between native place and modernity, which span the local, regional, and national levels. […] [T]hroughout, Ng convincingly brings to light Li Jieren’s ceaseless improvement of his writing on the 1911 Revolution in all its complexity, and foregrounds the writer’s craft in depicting the structure of daily life, geographic specificity, and social customs that are inseparable from the overall meaning and import of the revolutionary events. In sum, The Lost Geopoetic Horizon of Li Jieren makes a significant contribution to our understanding of the politics of localized memory and alternative forms of microhistorical configurations of place against hegemonic macrohistorical narratives and cultural paradigms in the PRC.”
Yuehtsen Juliette Chung, National Tsing-Hua University, Taiwan, MCLC Resource Center Publication, June 2016.

1.) Introduction: The Man, The Place, The Novel
2.) From Tianhui to Chengdu: Geopoetics and Historical Imagination
3.) No Place for Good Memories: Chengdu 1911
4.) Tempest in a Teacup: Local Memorial Dynamics
5.) Love in the Time of Revolution
6.) The Road to Perdition