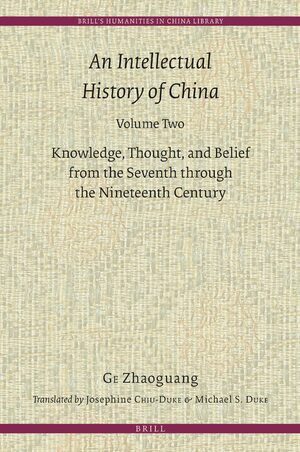 Series:  Brill's Humanities in China Library, Volume: 12
Author: Zhaoguang Ge
A history of traditional Chinese knowledge, thought and belief from the seventh through the nineteenth centuries with a new approach that offers a new perspective. It appropriates a wide range of source materials and emphasizes the necessity of understanding ideas and thought in their proper historical contexts. Its analytical narrative focuses on the dialectical interaction between historical background and intellectual thought. While discussing the complex dynamics of interaction among the intellectual thought of elite Chinese scholars, their historical conditions, their canonical texts and the “worlds of general knowledge, thought and belief,” it also illuminates the significance of key issues such as the formation of the Chinese world order and its underlying value system, the origins of Chinese cultural identity, foreign influences, and the collapse of the Chinese world order in the 19th century leading toward the revolutionary events of the 20th century.
E-Book (PDF)

€198.00$238.00
​
Add to Cart
Ge Zhaoguang is a Professor of History at Fudan University, Shanghai. He was the founder of Fudan’s National Institute for Advanced Humanistic Studies and served as its Director for six years. He is well known for his studies of Chinese history and the religious and intellectual history of ancient China. He has been a visiting professor at Kyoto University in Japan, City University of Hong Kong, Katholieke Universiteit Leuven in Belgium and National Taiwan University. He was also appointed Princeton University Global Scholar for 2009-2010. Among his many Chinese publications are Zen Buddhism and Chinese Culture (1986), Taoism and Chinese Culture (1987), Ten Chinese Classic Canons (1993), Chinese Intellectual History, 2 volumes (1998 and 2000), Here in 'China' I Dwell (2011).

Josephine Chiu-Duke is an Associate Professor of Chinese Intellectual History in the Asian Studies Department of the University of British Columbia. She is the author of To Rebuild the Empire: Lu Chih’s Confucian Pragmatist Approach to the Mid-T'ang Predicament (2000) and the editor of a Chinese work entitled Liberalism and the Humanistic Tradition – Essays in Honor of Professor Lin Yü-sheng (2005). She has also published many articles in both English and Chinese on traditional Chinese women and contemporary Chinese thought.

Michael S. Duke is Professor Emeritus of Chinese and Comparative Literature from the Asian Studies Department of the University of British Columbia. He is the author of several books including Blooming and Contending (1985). He has also translated many modern Chinese works of fiction such as Raise the Red Lantern (1993), The Fat Years (2011) and co-translated with Timothy D. Baker, Cho-yun Hsu, China: A New Cultural History (2012).

7 Tang Dynasty Thought I: from Unity to Intellectual Crisis (ca. Mid-7th to Mid-10th Centuries CE)
Prologue: Power, Education and the Intellectual World
1 Mediocrity in a Flourishing Age: Knowledge and Thought in the First Half of the 8th Century
2 The 8th- to 10th-Century Transformation of Buddhism I: The Decline of Theoretical Interest
3 The 8th- to 10th-Century Transformation of Buddhism II: The Victory of Chan Buddhism and the Defeat of Buddhism

8 Tang Dynasty Thought II: From Unity to Intellectual Crisis (ca. Mid-7th to Mid-10th Centuries CE)
1 The 8th- to 10th-Century Transformation of Buddhism III: Language and Meaning
2 Re-establishing National Authority and Intellectual Order: A New Understanding of Intellectual History Between the 8th and 9th Centuries
3 Anti-Buddhist Persecution of the 840s and 9th-Century Daoist Religion

9 From Song to Ming: The Establishment of a New Tradition, I (Mid-10th Century to the End of the 16th Century)
Prologue: China Before the Birth of the Neo-Confucian School of Principle
1 Luoyang and Kaifeng (Bianliang): Separation of the Political and Cultural Centers
2 Continuation of Neo-Confucianism: The Zhu Xi-Lu Xiangshan Debates and Their Surroundings

10 From Song to Ming: Establishing a New Tradition II
1 State and Scholars Support the Expansion of Culture and Establish the Uniformity of Ethics in Everyday Life in the Song Dynasty
2 From Yuan to Ming: The General Condition of the World of Knowledge, Thought and Belief
3 Making Waves Again: The Rise and Significance of the Learning of Wang Yangming

11 From Ming to Qing I: From Tianxia, “All under Heaven,” to the “Ten Thousand States” (End of the 16th to the End of the 19th Centuries)
Prologue: From “All under Heaven” to an “Age of Ten Thousand States”: Background to the Reinterpretation of Ming and Qing Intellectual History
1 Collapse of Heaven and Earth I: The Ancient Chinese Cosmic Order Encounters Western Astronomy
2 Collapse of Heaven and Earth II: “All under Heaven,” “China,” and the “Four Barbarians” as Depicted in Ancient Chinese Maps of the World
3 The Rise of Textual Criticism and Evidential Research and the Chinese Intellectual World from the Mid-17th to the Late 18th Centuries

Epilogue: China in 1895: The Symbolic Significance of Intellectual History

Bibliography
Index
All interested in the history of pre-modern and modern Chinese thought and intellectual history, including specialist scholars, graduate and undergraduate students, academic and public libraries, educated laymen.