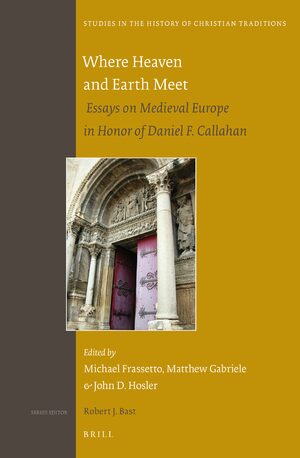 Where Heaven and Earth Meet: Essays on Medieval Europe in Honor of Daniel F. Callahan

Editors: Michael Frassetto, John Hosler, and Matthew Gabriele
Where Heaven and Earth Meet is a Festschrift in honor of Daniel F. Callahan, Professor of History at the University of Delaware. It is an interdisciplinary collection that celebrates and advances research in his principal scholarly interests. One central focus is on the writings of Ademar of Chabannes and what they reveal about heresy, music, warfare, and the Peace of God in the early Middle Ages. Another is on Western religious history (ecclesiastical houses, hagiography, and papal writings), and the collection is rounded out by studies of early Islamic Jerusalem as well as Arabic numismatics. Contributing authors include Professor Callahan’s former classmates, graduate students, colleagues and admirers of his research. The collection will be of interest to researchers in art history, history, musicology, and religion.

€129.00$159.00
​
Add to Cart
Michael Frassetto (Ph.D. University of Delaware) is Adjunct Professor of history at the University of Delaware. He is an expert on medieval religion, heresy, and anti-Judaism/anti-Semitism and is the author of The Great Medieval Heretics: Five Centuries of Religious Dissent (Bluebridge, 2010).

Matthew Gabriele (Ph.D. University of California, Berkeley) is an Associate Professor in the Department of Religion and Culture at Virginia Tech. He graduated from UD with a Honors BA in 1997, mentored by Daniel F. Callahan.is the author of An Empire of Memory: The Legend of Charlemagne, the Franks, and Jerusalem before the First Crusade (OUP, 2011).

John D. Hosler (Ph.D. University of Delaware) is Associate Professor of History at Morgan State University. A specialist on high medieval military history, he is the author of John of Salisbury: Military Authority of the Twelfth-Century Renaissance (Brill, 2013).

Chapter 3: “Ademar of Chabannes as a Military Historian”
Bernard Bachrach, University of Minnesota

Chapter 7: “Ademar of Chabannes and the Peace of God”
Michael Frassetto, University of Delaware

Chapter 8: “The Liturgy, Its Music, and Their Power to Persuade”
James Grier, University of Western Ontario

Chapter 9: “Female Religious as Collectors of Relics: Finding Sacrality and Power in the “Ordinary””
Jane Schulenberg, University of Wisconsin, Madison

Chapter 10: “Heresy and the Antichrist in the Writings of Ademar of Chabannes'”
Daniel F. Callahan, University of Delaware

Institutions, research libraries, graduate students, and scholars interested in the history of Christianity, medieval culture and religion, heresy, Jerusalem and the West, and Adémar of Chabannes.